Cottonmouth strikes back at Luke by taking his vengeance out on the people of Harlem, while detective Knight and Scarfe face an unexpected threat.

*Luke retrieves the swear jar from the rubble, but Misty finds his photo of Reva.
*Claire 'Night Nurse' Temple makes her series entrance, chasing down a mugger who tries to take her bag. Later, at her mother, Soledad's (Sonia Braga!) diner, she tells her about what happened at the hospital when her friend/co-worker was killed (in Daredevil S2), and that she has helped people with special abilities and wants to continue doing so, now that she's been blackballed by the hospital.
*In a strategy session with his crew, Cottonmouth shoots a man for suggesting 'benign neglect', tells his men to shake down everyone they can and to tell them they're paying the 'Luke Cage stupidity tax.' When the victims come to Luke for help, he retrieves some of their merchandise.
*Luke goes to the club, fights off several of Cottonmouth's men, whereupon Shades finally recognizes him as being Marc Lucas. Shades shows Cottonmouth footage of a Hammer Tech alien-technology-based 'Judas bullet' which he believes can kill Luke.
*The Captain (The Wire's Sonja Sohn!) and the LT tell Misty that Scarfe is under IAB investigation for various things including the disappearance of Chico.
*Luke gets Aisha's father's ring back from Zip.
*The LT tells Scarfe about Internal Affairs, and that Cottonmouth needs them to get Domingo's guns out of evidence.
*Luke talks to Eddie in Aisha's baseball memorabilia shop, tells him to tell her he needs to see her.
*Claire sees Luke on tv, finds out he works the barber shop.
*Pop's memorial - Aisha nearly pulls a gun on Cottonmouth but Luke stops her. Cottonmouth gives a speech, then Luke gives a better one.
*Scarfe has a van full of Domingo's guns, but chooses not to answer Cottonmouth's text when he asks him if he has them yet.
posted by oh yeah! (12 comments total) 1 user marked this as a favorite
That 'benign neglect' bit was some A+ cultural-reference name-dropping. Beautiful.

Oh! I forgot to do a bullet point for Dapper Dan and his great suit (not to mention the one he fitted Luke for, but I already know from The Good Wife how well Mike Colter wears a suit).
posted by oh yeah! at 11:50 AM on October 1, 2016 [6 favorites]

Five episodes in, we finally get our Bechdel-Wallace pass. I expected Misty and Mariah to do it, but at least it happened.

Misty being naive about her partner's corruption is an almost obligatory trope, but it didn't really play too well in this particular episode IMO.
posted by tobascodagama at 7:57 PM on October 5, 2016 [1 favorite]

That was around the time Donald Sterling history of racism started getting more attention before he was finally forced out of the NBA. Maybe that had something to do with it?
posted by Jugwine at 8:34 AM on October 6, 2016 [1 favorite]

I love that this show takes such pains to establish a reading list for viewers. Legitimately, I think that's awesome.
posted by tobascodagama at 10:04 AM on October 6, 2016 [3 favorites]

this show is so good, but i suppose everyone will burn on it for being slowed down. really you should read the comics if you want the action, this is all about the conflict. it reminds me of the jessica jones show in that way, very psychological.
posted by eustatic at 10:24 PM on October 6, 2016

This might be the episode where I'm losing interest... I know the whole conceit of this show is dude is bulletproof, so there will be lots of shooting, but I just don't have the stamina to watch torture over and over. How did extreme violence become so normalized on TV.

The performances are incredible, the aesthetic is incredible, the characters are carefully constructed, the writing is solid, the politics are thoughtful if potentially conservative, but I am wearying of seeing people get shot, beaten and terrorized.
posted by latkes at 10:07 AM on October 26, 2016

Side thing - is it being established that the bad cop is a vegetarian? He ordered tofu in one episode, got the vegetarian wrap in this one.
posted by latkes at 10:08 AM on October 26, 2016

I'm late to this party, but I'm really liking this show. I get where latkes is coming from with regard to the grimness of the violence, but maybe I'm just inured to it at this point after... well, a whole generation of things getting mroe violent on TV and in movies.

I really noticed the music in this episode. The opening song by Jidenna blew me away. I also loved how the organ music during Pops's memorial was born from the world of the scene but also worked on the meta-level to heighten the tension and enhance the subtext while retaining some of the gospel/blues identifiers. Just genius.

The acting is superb. I especially like Mahershala Ali's portrayal of Cottonmouth. Alfre Woodard is great in everything she does. The casting is really excellent.

I'm also really enjoying this show unfolding at its own pace.
posted by under_petticoat_rule at 11:01 AM on January 29, 2017 [2 favorites]

I did crack up that Cottonmouth had one intellectual lackey...and then well, not any more.

I really enjoy Luke being a public superhero.
posted by jenfullmoon at 9:09 PM on February 5, 2017 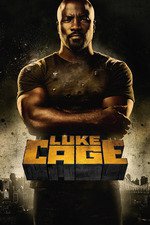