Charlie gets in over his head with the Thin Man team, and hears a tall tale from Glen Babbit (Daniel Stern). Peeved, Charlie comments on what he knows of Babbit's pre-war friendships, which reaches the ears of X-2 (Richard Schiff). This forces Frank to dig up some old material of his own.

One of the major tensions of the show so far has been between Frank Winter and wunderkind Charlie Isaacs with “a once in a generation mind,” according to his boss Akley. Not only are Winter and Isaacs on opposing teams, there are major tensions between them stemming back to Winter’s refusal to approve Isaac’s dissertation for publication. When Isaacs spills a secret that imperils Winter’s friend and colleague Glen Babbit, Winter doesn’t flinch. He makes sure Isaacs’ wife Abbie is listening in as a telephone operator when Winter tells his father that Isaacs had plagiarized in his dissertation. 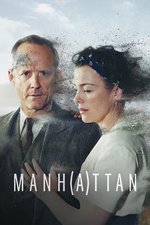