Cult Film Club: Recruited by an intelligence agency, outstanding martial arts student Bruce Lee participates in a brutal karate tournament hosted by the evil Han. Along with champions Roper and Williams, he uncovers Han's white slavery and drug trafficking ring located on a secret island fortress. In the exciting climax, hundreds of freed prisoners fight in an epic battle with Lee and Han locked in a deadly duel.


'Enter the Dragon' Turns 40: What You Didn’t Know About Bruce Lee
The Making of Enter the Dragon
Enter the Dragon Filmmakers Reflect on Bruce Lee’s Most Famous Role
Bruce Lee and Jackie Chan in their extremely brief battle in Enter the Dragon
posted by maxsparber (15 comments total) 6 users marked this as a favorite
It's rarely mentioned how much the James Bond franchise inspired this film. Evil leader, secret lair, British spies.
posted by Cool Papa Bell at 2:26 PM on September 15, 2014

I still like to re-enact the scene in which Han calls out assignments by name during the siege. How many bosses know so many employees' name and can shout them out under duress?

I just rewatched the O'Hara coup de grace scene. Still so incredibly bizarre to me! The spacey music, the slo-mo, Bruce's weird sad face. I wonder what they were going for?

On an uglier note, it's interesting that Roper and Williams got with the ladies, but not Lee, who was too otherworldly and too monk-like for that, unlike real-life Bruce Lee. I'm guessing this is a concession to the way western audiences wanted to see Asian heroes – asexual.
posted by ignignokt at 8:56 PM on September 15, 2014

I'm guessing this is a concession to the way western audiences wanted to see Asian heroes – asexual.

His other films would suggest this is not the case.
posted by juiceCake at 9:30 PM on September 15, 2014

Those were Hong Kong films, though. This was the big Making It in America crossover one.
posted by ignignokt at 9:33 PM on September 15, 2014

Actually, it's very apparent that Enter the Dragon is a takeoff of a Bond film, but the film turns most of the big clichés on their head. It's not a super secret killer agent out on the hunt for a secret evil genius that seemingly came out of nowhere, but rather a recruited monk sent in for intel against a lowlife warlord that has managed to barely skirt the law for awhile. The henchmen look like 2nd rate street thugs that all of our main characters can walk through in a fight. The women in Bond films are often inserted as femme fatales or playthings for 007, as opposed to this film in which that objectification is toppled over by the cold truth that these women were kidnapped, had addiction forced upon them, and brainwashed into servitude. Lee's character has a number of motivations to not sleep with women, such as: piety for one, knowing these women are victims, he is there to work, and is there on a personal vendetta to get revenge for his sister. I'm not sure how it would serve that character to be some kind of hip swinger dashing through every women's bed when it very clearly would be out of place in this movie.
posted by P.o.B. at 2:40 AM on September 16, 2014 [3 favorites]

Sure, it makes sense in the context of the plot. I just think it's possible that the plot happens to be constructed that way so as to make Enter the Dragon a safe bet on Western shores, possibly informed by Bruce Lee's experiences with racism and casting up to that point.

As powerful a movie as this is, it is still an early example of the trope of the acceptable Asian man in American media. Lee in Enter the Dragon is lot less human than Chen in Fist of Fury or Lee's character in The Big Boss. It does, in fact, make for a cool character - a distant, philosophizing superhuman - but it's conveniently also maximally non-threatening to white male audiences.

I do think that was a wise choice for someone trying to make a blockbuster in the seventies. I just think it's unfortunate that it was probably necessary.
posted by ignignokt at 3:31 AM on September 16, 2014

If you're a fan of Enter The Dragon, you'll love this Zucker Bros. parody from Kentucky Fried Movie: A Fistful of Yen.
posted by valkane at 4:36 AM on September 16, 2014 [3 favorites]

Jim Kelly, who played Williams, had his own spectacular film career.
posted by Peccable at 5:58 AM on September 16, 2014 [1 favorite]

Those were Hong Kong films, though. This was the big Making It in America crossover one.

I realize that, hence the fact that they don't overly sexualize Lee's characters in films that are not supposed to pander to an American audience makes it doubtful that they changed to do the exact same thing in this film.
posted by juiceCake at 6:55 AM on September 16, 2014

We are talking about a film from 1972, and nobody is arguing the fact that it's a thoughtful film by today's standards. If we simply consider the context in which this movie is over forty years old then I think a better conversation would consider how progressive a Hollywood film it was for it's time by simply having an Asian American male lead.
posted by P.o.B. at 1:01 PM on September 16, 2014

This is one of my favorite movies. It's so quotable! I have the DVD set with Game of Death on it.

The big underground fight scene is so cheesy but still classic. This movie is truly extra-ordinary.
posted by the man of twists and turns at 11:36 PM on September 16, 2014 [1 favorite]

OK, I love this movie. There is no need to defend it from me. But there's nothing wrong with discussing what pushed the decisions behind it.
posted by ignignokt at 2:12 PM on September 17, 2014

This movie has so much great scenery and background, like the monks meditating during the sparring match, or the feast with all the entertainment. The allusions to fighting oneself in the hall of mirrors is iconic.

I'd love to discuss the actual decisions behind the making of the movie. I'd even talk about certain ad hoc ideas possibly behind those decisions, as long as we keep the context in which this film was made in mind.
posted by P.o.B. at 4:54 PM on September 17, 2014

I didn't see this movie until long after it was considered a classic. I love the many hip hop references that allude to it specifically. The Boondocks TV show created Bushido Brown, who gets to remark "Man, you come right out of a comic strip", playing on Jim Kelly's great and slightly different line.

I also recalled that Bolo got a shoutout from Kuniva (D-12 - affiliated with Eminem) in Under the Influence. (eminem ft d12 - under the influence): "If I go solo - I'm doing a song with Bolo".

Kane began a song with "Enter the Dragon", though it was just in passing really, and though Ice Cube devoted a whole song to martial arts, Street Fighter didn't have one good line about this film. And while Binary Star's "Honest Expression" had a great clip from Bruce Lee, it wasn't the "you'll miss all that heavenly glory" line from here.

Aside from that, I loved the charlie brown sound effects during many of the fight scenes. International Karate used those as well, though because of the dates, it's more like the game took them from the movie or the Peanuts.

When O'Hara walks in as Bruce trains and Bruce waits until the door closes and does that lightning-fast punch series, I remember rewinding that on vhs and watching it and it was so fast even in slow motion it was blazing. I'm a pretty fast dude, and I just marvel at it.

I saw the Chinese Connection before I ever saw Enter the Dragon, but that punch was when I realized just how fast Bruce was. Then he does it to O'Hara in the fight about half way through the film, after Bolo kills Han's guards. Just wicked.
posted by cashman at 12:34 PM on September 18, 2014

I unashamedly love this movie, though I can't watch the usual cable channel butcher jobs that come on. My favorite scene will always be the underground fight. "Oh, more dudes? Yeah! Bring it!"
posted by ob1quixote at 12:07 AM on September 21, 2014 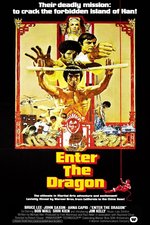