Two old friends go to spy on a new table tennis champ at a rival high school, but meanwhile their own team is falling apart. This is the first episode of the most recent anime series by Masaaki Yuasa, who recently guest directed the Adventure Time episode Food Chain. US distributor Funimation has put the entire series on YouTube, so watch this episode there! More, spoiler-free information about the series inside.


Based on a well loved manga, Ping Pong The Animation is a tight, eleven episode series that aired on Fuji Television's noitaminA last fall. In order to capture the original source's lively art style, Yuasa employs innovative editing and animation techniques. The story is full of amazing characters, and by the end you'll be rooting for both sides of every match. Even the soundtrack is on point. If you still aren't convinced, skip ahead to this match from the end of the first episode, which is a pretty great example of every element in the show coming together to make something amazing.

I've already seen this show multiple times, but I'm keeping this thread spoiler free because I assume most people here haven't watched it. If this thread goes well I'll be posting threads for the rest of the series every three days or so. If you haven't already gotten the hint, I think everyone needs to watch this show, as it's really is amazingly well made, easy to watch even though it's subtitled, and has a deeply hopeful message.

Other than YouTube, In the US you can watch the series on Hulu and commercial-free on Funimation.com with a subscription. It's also on Crunchyroll for non-English speaking countries.
posted by The Devil Tesla (4 comments total) 2 users marked this as a favorite
See, when I first saw this post? I thought it was about the series Ping Pong Club. Which is very different. And not so serious.
posted by happyroach at 2:39 PM on September 16, 2014 [1 favorite]

I enjoyed it, but it didn't really grab me until 15 minutes in, when the Chinese guys were evaluating the Japanese guys via sound. The animation style is definitely different from what I have seen, though I am not super literate on anime. I will definitely watch the next episode.
posted by Quonab at 8:00 PM on September 16, 2014 [1 favorite]

Mushishi aside (because Mushishi is just... special), Ping Pong the Animation was by far the best anime of the last season and one of the best shows on TV in general. It has interesting, likeable, layered characters, a fantastic (albeit controversial) visual style, a deliberate direction with great finesse, a solid song selection... not to mention many highly-memorable scenes and running jokes (like the poetic "listening in the wind" scene of the first episode and others I can't write about because spoilers). It is a truly beautiful work.

I really wish more people would give this a chance.
posted by procrastinator at 2:05 PM on September 18, 2014 [1 favorite]

I was watching the response to this post with interest, because the post deviated from the way people have usually gone about making FanFare posts for new shows. Usually people announce on FanFare Talk that they are interested in discussing a certain show, and then people express interest (for example, this thread on FanFare Talk in which people suggest anime series and see if there is enough interest). So what you have under the cut (the "more inside") part typically would have been in FanFare Talk. People have also posted shows on FanFare without previous discussion on FanFare Talk. So what you did represents a third approach - do the selling of the show on the 1st episode post - and I am interested in seeing if this is an effective approach to promoting participation.

I have seen all the episodes of Ping Pong the Animation - while the characters were great, I had some difficulty with the visual style, as I kept transposing Kemonozume, an earlier work by the same people behind Ping Pong the Animation, on the Ping Pong scenes. And that kept taking me out of the story and probably prevented me from appreciating it fully.
posted by needled at 4:53 PM on September 18, 2014 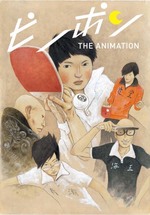