In a city of humanoid animals, a koala named Buster Moon (voices by Matthew McConaghey) is a hustling theater impresario attempting to save his theater with a singing competition, which becomes grander than he anticipates even as its finalists find that their lives will never be the same.


Cast includes:
Reese Witherspoon
Seth MacFarlane
Scarlett Johansson
John C. Reilly
Taron Egerton
Tori Kelly
Jennifer Saunders
Jennifer Hudson
Garth Jennings
posted by I_Love_Bananas (9 comments total) 1 user marked this as a favorite
If Rosita is capable of the kind of inventive ingenuity she resorts to in order to free her schedule for practice then her true gift is not singing.. just sayin'.
posted by Nerd of the North at 4:49 PM on January 16, 2017 [2 favorites]

This is a weird one for me.

I'm positive that I saw trailers for this more than nine months before it was released (with an originally planned release date something like Summer 2016). Consequently, I was surprised to see a trailer for it in front of Rogue One, with a release date in December 2016 -- I assumed it had already come and gone from theaters. Not so, though, so I ended up seeing it with a young relative today.

On a technical level, I think they did a good job. The animation is very nice, and I think if Illumination wants to put out more movies in this universe I wouldn't be opposed to it. The plot, though, is rough -- to the degree that I ended up wondering if there was a lot of tinkering after showing it to test audiences.

Where the movie feels the most like this is surrounding the primary protagonist.

I think it's pretty clear that we're supposed to view Buster Moon as sort of an eccentric optimist, but that falls really flat pretty quickly. I'm supposed to like him, and to think he's a guy who didn't mean to get into this situation and now he's just trying to get out of it -- but then it's established that his whole adult career has been based on him getting money from his rich friend, that he has no problem stealing electricity or water from others, and that he repeatedly undertakes poorly considered and dangerous construction projects that the movie even acknowledges almost result in people getting killed.

I mean, I don't really want to bring up OSHA in a review of an animated family film, but: seriously, c'mon people.

So ... I have a big problem with the film in that Buster feels from scene to scene like he's coming from two different rewrites of the script. In one of them, he's a kind-hearted optimist, and in the other he's a scammer and a con man -- though in the end, the movie only really wants us to acknowledge the former. Maybe it's asking too much of a family movie, but it just feels like they drop a lot of questionable choices into his parts of the story and then act like he didn't do anything wrong.

But, all that said, the movie was ... fine? There's certainly fun parts. I'm not convinced they needed all the celebrity voice talent, but they all did a good job. The conclusion is relatively straightforward, and ultimately it ends up being pretty unchallenging entertainment.

From the get-go, the koala protagonist was the glaring problem at the heart of this movie for me and my 12 year old, too. I guess Buster was supposed to be a lovable hustler, but establishing that by showing him cleverly evade workers who were asking to get paid for the work they'd done? Wow. And it only went downhill from there, until his easy lies and scams reached a positively Trumpish level. (I'm actually curious to know if the release date was delayed to avoid political comparisons during the election campaigns.)

Then there was the continuing misery of insolvency as the key plot device (and as the justification for all kinds of shady actions by the main character). I really hate it when they do that in kids' entertainment, and I remember hating it as a kid, too. But what do I know - maybe there's a vast audience of kids who love stories about overcoming financial problems by any means necessary?

I also remember being annoyed by the way the rat got a girlfriend by basically harrassing and following her in the street. Don't show that shit working, makers of movies for kids.

Of course, it doesn't help that the other animated movies I've seen recently were Zootopia and Moana, which had set the bar extremely high. I mean, Sing wasn't terrible. Not really laugh out loud funny and a bit frustrating, but all in all ...bearable, I guess?
posted by sively at 3:27 AM on January 18, 2017

Yeah, that pig mom was a total super genius buried alive under domestic servitude. And then we'll pretend all her wasted talents are okay because her husband (who did nothing to support her dreams) liked her act at the end. It's taking the whole "supermom" thing way too far to show how effortlessly she manages a horde of children with an absentee spouse and still lives out her dream without ever inconveniencing anyone. I kept waiting for her to burn that house down.

Yeah, I didn't even want to get into the piglets, but it's weird. I will say that Rosita's story was less bad than the trailer made it out to be -- I'm not saying the husband was great, but the trailer made it seem like it was going to be much harsher. But, yeah -- 25 kids?

I know this is animated movie logic and all, but the kids are all the same apparent age, and that's on the order of three times the size of a litter of pigs in the real world. The writers didn't think "stay at home mom keeping track of 8-10 kids of the same age" was a big enough challenge?
posted by tocts at 12:04 PM on January 18, 2017 [1 favorite]

I think if Illumination wants to put out more movies in this universe I wouldn't be opposed to it.

Yep, drop Buster and Mike (the two with the weakest plotlines, even though Buster's was the central one), and I'd watch a followup that focused on Rosita, Johnny, Mena, and Ash. Or even one just about Johnny and his dad.
posted by DevilsAdvocate at 10:22 PM on January 21, 2017

Wrangled a cluster of kids to see this at a birthday party yesterday.

I guess I never really saw Buster Moon as the protagonist of the film; he is very much like the five acts he books for his performance - a dreamer with some talent but some things that hold him back as well. But yeah, he wasn't very compelling or interesting, and neither was Mike - I can't even recall how Mike's story wraps up, to be completely honest - I just recall his final number going on while bears and mice were driving to the theatre.

Past that, there are still problems - shallow characters & unexplained plot points largely being most of it - but I liked Rosita, Johnny, Mena and Ash; I think that a key to this film is that each character was pitched (heh) at a different level/demographic of the audience. Overworked, underappreciated domestic goddess; son struggling for identity; shy girl with well-meaning but overbearing relatives; strong woman who needs to stand on her own.

All that being said, a perfectly fine, serviceable movie - I enjoyed myself, I enjoyed the range of music that was played throughout the film, I appreciated the fact that it was a low-stakes movie. The world wasn't ending, it was just a group of people struggling with their dreams and their identity.

It could have been more - better polished, better developed, etc...but in a way, the fact that the whole thing kinda feels like a good show put on despite those touches kinda makes it feel like it was a meta version of the show the movie was about.
posted by nubs at 11:01 AM on January 22, 2017 [1 favorite]

Rosita's husband was an oblivious jerk. Johnny's father was a criminal. Ash's boyfriend was a complete asshole. Meena's father (grandfather?) was a pushy bastard. Stan was a cheat and a stalker. Buster was an inept, unintentional con artist. Was there a male role model in this movie worth a damn?
posted by GhostintheMachine at 8:46 PM on July 2, 2017 [1 favorite] 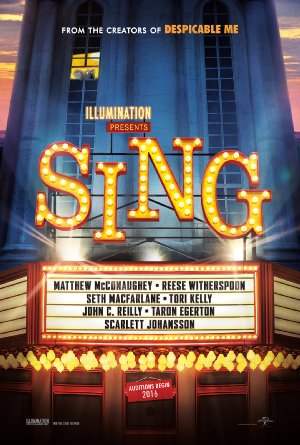