A five-year-old Indian boy gets lost on the streets of Calcutta, thousands of kilometers from home. He survives many challenges before being adopted by a couple in Australia; 25 years later, he sets out to find his lost family.

as an expatriate who moved away from his birth country at the age of 9 and who waited for 20 years before going back again, I should say that I have also had that exercise of loading up Google Earth and tried to retrace the steps of my past and search for my old grade school, my childhood home, the park that my parents had taken me to when I was young.

I am fucking amazed at what Saroo pulled off. If this wasn't based on a true story, I wouldn't have believed it as fiction.

Places change in 20 years, the developing world has developed. New construction re-formats and over-writes the landmarks of our memory. I have tried and failed to do a lower stakes version of this, and I'm glad for the real Saroo Brierley to see that he was able to pull off that dream.

One thing I will say is that I don't cry often in films, but that montage where he returns to his village and his memories take over and it's like he's walking on instinct. Yes. To all of that. All of that is true for any of us who've been away from home for too long but are surprised when memories resurrect themselves, viscerally and truly, in that moment of recognition.
posted by bl1nk at 7:46 AM on January 20, 2017 [4 favorites]

Six Oscar nominations, including Patel and Kidman.
posted by effbot at 5:57 AM on January 24, 2017

After the fictionalized reunion scene I had pretty much cleaned myself up in time for the lights in the theater to come on during the credits...

Then they show a) the photos of real Saroo growing up, and b) the real Saroo taking his adoptive mother to meet his birth mother, and I was an even bigger mess than before.

I knew nothing about this going in except that Dev Patel and Nicole Kidman were in it, and there was a small adorable child in it. Being told that it was a true story in the titles at the beginning, I knew that the movie wouldn't have been made without a happy ending...So throughout the adversity that Saroo experiences, I kept thinking "It's okay, it has to have a Color Purple ending..." And of course it did, and it was emotionally satisfying.
posted by doctornecessiter at 7:45 AM on January 31, 2017

I saw Lion tonight. I normally hate "pull on your heartstrings" movies, but this was quite well done. Lots of great performances and visually breathtaking. I found myself wishing the film focused more on Saroo's relationship with his brother (his Australian brother) and less on his American girlfriend. His story was just as interesting and tragic imo.

Afterward, went straight to the restroom, which was full of middle-age, white women crying. It was oddly bonding, as I'm sure the majority were parents and some very possibly have personal experience with adoption.
posted by chaoticgood at 8:21 PM on February 3, 2017

Just saw this - it's now streaming on Netflix. I liked how I completely forgot the name of the movie until it was explained at the end. Such an amazing story.
posted by dog food sugar at 4:34 PM on July 12, 2017

We watched it this weekend. I recall the critics accusing Kidman and Wenham as being "white saviors" but I think that is a bit harsh. This is Saroo's story and while I'm not sure how much is fictionalized it feels authentic. Five out of five soggy tissues.
posted by Ber at 8:56 AM on September 5, 2017

Another endorsement here. For a classic "tearjerker" that is in many ways predictable in broad strokes, this story manages to tell this simple, but tragic, story in ways that maximize the human impact, assisted by strong performances -- the best of them from an untrained child actor. The camera uses his perspective to great advantage, and doesn't bother to over-explain the terrifying situation in which he finds himself or the threats that he only dimly perceives. Even the social worker who arranges his overseas adoption is given enough ambiguity that you question her motives and how that replicates hundreds of times over, and whether it balances against the unsafe conditions that India's street children (an astonishingly high estimate of 11 million countrywide) live with. I think it succeeds in part by avoiding oversentimentalizing his and his mother's poverty and deprivation, and concentrating on his emotional interior. I think the film leaves you with open questions about the entire process of international adoption.

The clunkiest part of the entire enterprise is Rooney Mara's composite character-of-necessity (I suppose), and I too wish there had been more about the (mentally ill?) brother, though that may be something that's too much attention for a dysfunctional person. At the very least it was a clear reminder that this sort of thing does not always end well. 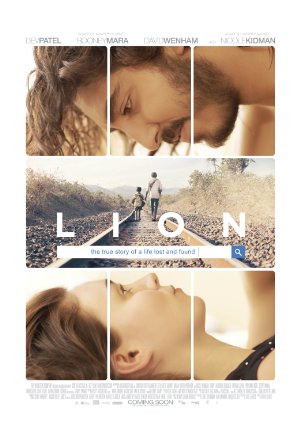