Neil Gaiman's retelling of stories from the Norse myths.


Gaiman's third approach to Odin, Thor, and Loki (after featuring the Norse deities in both "Sandman" and "American Gods" sets aside re-purposing and settles for a retelling of the original stories that they originally came from.
posted by Ipsifendus (2 comments total) 5 users marked this as a favorite
Like Gaiman, the first time I met Norse myths was in Marvel's Thor Comics. My knowledge of how the various elements interlink is therefore a bit fuzzy, but so far I'm enjoying it.

The style is perhaps a little too plain, but it allows for a frantic reading pace and little confusion.
posted by mushhushshu at 6:15 AM on February 8, 2017

This felt to me like a metaphor for what's going on in the U.S. right now. Trump is Loki, deliberately and/or carelessly causing problems and destruction, until a breaking point is reached, and everything ends up destroyed.
posted by still_wears_a_hat at 8:52 AM on May 27, 2017 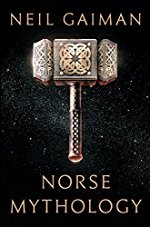