Book 4 in our Publication Order read through of the Discworld novels by Terry Pratchett.


“Although the scythe isn’t pre-eminent among the weapons of war, anyone who has been on the wrong end of, say, a peasants’ revolt will know that in skilled hands it is fearsome.

For Mort however, it is about to become one of the tools of his trade. From henceforth, Death is no longer going to be the end, merely the means to an end. He has received an offer he can’t refuse. As Death’s apprentice he’ll have free board, use of the company horse and being dead isn’t compulsory. It’s the dream job until he discovers that it can be a killer on his love life…”

First book - The Color of Magic
Previous book - Equal Rites
Next book - Sourcery
posted by lazaruslong (9 comments total) 3 users marked this as a favorite
Death begins to come into focus.
posted by Chrysostom at 6:53 PM on March 7, 2017 [1 favorite]

Agreed, this is the book that really starts Discworld. The first two were mostly parodies of fantasy tropes, and Rites only moved beyond that by its play on gender roles. Good stories, but they used Discworld as a backdrop or excuse to make jokes. Here Pratchett starts to actually turn a serious eye to what he's unintentionally created, and examines it closely. He still hasn't completely left the magic behind, but now it's off-centre. It's a tentative step, but an important one. If every story had to have magic at its center it would have limited him, but as he slowly lets go of it he can embrace a larger world.

One of my favourite parts is Mort having to repeat his name constantly. Everyone keeps calling him "boy", and at first he's just letting them know his name. But over time he starts to assert himself more and more, and insists on being called Mort after he takes on Death's voice. The way he refers to himself mirrors his own growth. It's a small thing, but powerful.
posted by GhostintheMachine at 8:21 AM on March 8, 2017 [5 favorites]

I like it, although Death seems a bit dickish compared to his later appearances. (I will admit to not having read it recently, so I might be more generous on a re-read.) It's still good, though, especially as it sets up the secret origin of one of my favorite Discworld characters.
posted by Halloween Jack at 6:31 PM on March 8, 2017 [1 favorite]

I think my favourite scene in this book is when Mort helps the witch die - it's such a lovely little vignette and says so much about the witch's character in a short time. She is so matter-of-fact, but still warm and helpful to him, even though she is dying. And then after her death returning to her young sexy self, revealing who she really was inside. As I grow older I relate to her more and more.
posted by 5_13_23_42_69_666 at 4:10 AM on March 17, 2017 [4 favorites]

That scene really was touching, agreed.

After a quick re-read, I was struck by how many anachronisms there were; references to things that don't fit into the discworld but rather into our world. There are several audio references in particular, to headphones and Walkman's. It's actually kind of jarring.

I hated the part where Death punched Mort.
Not sure I'd call it a punch, it was more of a slap. Still, I didn't like it either. Particularly that he left scars on Mort's face... I did like the happily-ever-after-sort-of ending, and the fact that Mort and Ysabell got the alternate universe in pearl form as a wedding gift.

Shotgunning a ton of Pratchett this past month or so... Agreed that this is where the series starts to take shape (i.e. Rincewind has yet to really do it for me, the Granny of Equal Rites is a rough sketch compared to what we'll get starting in Wyrd Sisters, etc.) but also... I started Reaper Man immediately after this, followed by Soul Music, and those books just feel so much ... fuller than this one. Even if they're covering a lot of the same ground, they do so with more virtuosic intensity, I guess? I feel like Pratchett played in these sandboxes and found the characters that could go the distance and those that couldn't, and in this case, Death was the one that could really continue on, while Mort and Ysabell were left as footnotes in later tales. And Albert, I suppose.

So I guess this is the giant's shoulders that the later Death books are standing on, but the later ones still stand taller, for me.
posted by Navelgazer at 10:29 AM on February 1

Discworld always seemed to me as an iterative process - after finishing a book it was like there would be open-ended questions or bits left over or he was struck by a "what if...?" during the writing that he had to follow up. The earlier books are more rough-hewn with fewer moving parts, but I enjoy the sense that Terry's still working out what he could do. You can sort of see the thumb-prints on them, and they've not been smoothed over.
posted by Grangousier at 12:54 PM on February 1 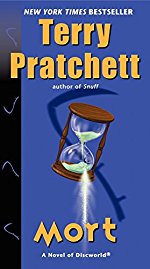