In 17th-century France, Father Urbain Grandier seeks to protect the city of Loudun from the corrupt establishment of Cardinal Richelieu. Hysteria occurs within the city when he is accused of witchcraft by a sexually repressed nun.

This movie looks absolutely insane, blasphemous, reprehensible, and devoid of all merit. In other words, it's a perfect fit for Strange Club. It's also been super unavailable and impossible to track down in uncut form, UNTIL NOW: it appeared on the streaming service Shudder yesterday in a 109-minute unrated cut - "the most complete version of the film in existence." Lots of people are justifiably freaking out. Let's watch it.

In this banned masterpiece, the evil is real but the witches are not

You can sign up for a free 7-day trial to Shudder. Or joining costs $4.99 a month and you can cancel at any time. I've heard good things about the service from bona fide film nerds, but this particular movie is what's finally getting me to do the trial.

posted by naju (4 comments total) 1 user marked this as a favorite
Ah, The Devils. Oh boy. I watched the theatrical release of this movie back in 2004 (I think on VHS, oh my word) and I wrote this review for IMDB.

Yes, Oliver Reed delivers a tour-de-force performance (not to mention he looks great). Vanessa Redgrave is both radiant and convincingly insane, and, on the whole, the movie is interesting, but hard for me to take very seriously. Evidently Ken Russell took many of the historical facts in Aldous Huxley's "The Devils of Loudon," and added large parts from "The Rocky Horror Picture Show" and what looks to be a particularly over-the-top college production of "Marat/Sade."

First of all, I have to say that my main interest in the movie was just to check out the art direction. I'm quite fond of movies set in the 17th century, and several stills I had seen from the movie had piqued my interest. Now, there are many excellent and accurate baroque costumes and hairstyles (Oliver Reed, with his waxed mustache and gorgeous vestments, looks very much like the actual Urbain Grandier, and Georgina Hale as the spoiled baron's daughter wears a perfect 1630s coif), but there is a bizarre inconsistency to the entire production. For example, take Richelieu's 1930s era wire-rimmed specs, Michael Gothard's purple-tinted John Lennon frames, the mod-looking bob on Gemma Jones, and what the hell was up with Georgina Hale's black lipstick? Not to mention the guy playing Louis XIII seemed to be channelling a combination of Gary Glitter and Caligula, and sports pasties and a perm in the first scene when he was dancing the "naked moon" or whatever that routine was supposed to be.

An earlier reviewer stated that all Catholics should see this movie. As a Catholic, I would say that the horrifying facts of the possession of Loudon are done a disservice by the garish silliness of Ken Russell's direction. But the acting's good, and so is the art direction in large part. Also, Oliver Reed's death scene is quite well done, although I was scarcely as horrified as I thought I would be. As far as disturbing avant-garde films go, "The Devils" has nothing on Peter Brook's "Marat/Sade." But all in all, it's worth a look.

I really liked the set design, I always enjoy seeing depictions of historical places that look "new" instead of anachronistically aged and decrepit

in re: blasphemous shockingness, I was like "well that wasn't so bad really" at the end before I pegged to the fact that this still wasn't the completely uncut version

also, not knowing much about the movie going into it but expecting more of a horror film because of the site that was streaming it, I was a little disappointed about halfway through when I realized the Grandier pact-signers weren't going to actually show up. still fun though!
posted by prize bull octorok at 11:13 AM on March 21, 2017 [1 favorite]

This was deliberate. "Both Jarman and Russell had a liking for period details that would seem anachronistic to the uninitiated, such as round spectacles of the type worn by John Lennon, or green lipstick" (Rowland Wymer, Derek Jarman, 2005).
posted by verstegan at 11:02 AM on March 22, 2017 [1 favorite] 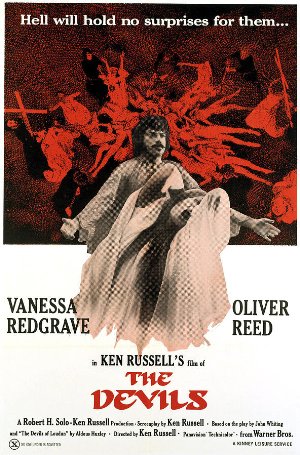