Niska attempts to sacrifice herself to get synths legal standing. The older synths face various trials and tribulations, while newer synths and humans are added to the fray.


The world of "Humans" expands as we meet synths used for manual labor in other countries. We also meet a character who initially identifies as synth despite being human. While a doctor attempts to upload her daughter's consciousness into a synth, a young entrepreneur sees a future for children synths.

Lots of ideas in this season. Many of which are deeply problematic.
posted by miss-lapin (11 comments total) 1 user marked this as a favorite
I have seen it as it was broadcast in the UK, and barely remember a thing.
posted by lmfsilva at 12:35 PM on March 23, 2017

I think I caught part of the first episode of the season, but nothing else until the double-episode season (series?) finale. I just sort-of forgot it was on and only stumbled upon the finale. AMC did a terrible job of promoting it.

Anyway...I can only speak to the finale, which tied-up pretty much all the loose ends and then dropped a huge bomb on the world, just in case, I think, the show gets renewed.
posted by Thorzdad at 1:32 PM on March 23, 2017

The poor happy synth from the first few episodes. He deserved better.
posted by vibratory manner of working at 5:07 PM on March 23, 2017 [1 favorite]

I'm absolutely in love with this show, have been since the first episode. I enjoyed Westworld for the thrill ride that it was, but Humans is to me its older sibling: calmer, thoughtful and more mature.

The key to its success, for me, is Katherine Parkinson, who hits just the right emotional notes in every single scene. They say that comedy is the hardest type of acting to do. I disagree -- I think it's science fiction, with comedy a close second. She has done both (I.T. Crowd) and has, in my opinion, nailed both.
posted by vverse23 at 8:16 PM on March 23, 2017 [3 favorites]

Katherine Parkinson is really, really good; no question. (She was great in “The Honourable Woman” too) but series 2 of Humans really didn’t click for me. I enjoyed the first series, but felt it sprawled a little - too many characters, too many stories to follow when a tighter structure would have worked better. Series 2 was even worse & I just gave up on it.
posted by pharm at 12:22 PM on March 24, 2017 [1 favorite]

I loved this season. The actors were great and I liked how they expanded the scope of the story in a realistic way. High quality fiction IMO.

Only thing I'm wondering about is, what their skin is made of if it can pass the uh, bedroom Turing test.
posted by bleep at 4:31 PM on March 24, 2017

I agree with you pharm. I feel like they tried to cram in too much and so a lot of ideas got diluted.

But also was I the only one disturbed by Karen going to relationship counseling because her husband raped Anita/Mia? If Mia was a "real person" would we feel ok about it? That was something that made me feel a bit icky.
posted by miss-lapin at 2:08 PM on March 26, 2017

While that's true, I still had trouble with it. It just struck me as they made it a pretty easy problem to get over it when in reality realizing your husband not only betrayed you by having sex with Mia/ Anita, but also was taking advantage of her was glossed over quickly. The first season seemed really focused on the difficult issue of what happens when synths become conscious and the second season....not so much.
posted by miss-lapin at 2:28 PM on March 26, 2017 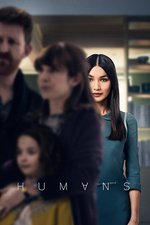