A personal shopper in Paris refuses to leave the city until she makes contact with her twin brother who previously died there. Her life becomes more complicated when a mysterious person contacts her via text message.
posted by komara (9 comments total) 3 users marked this as a favorite
I'm very interested in your interpretations of the final scene.
posted by komara at 9:36 AM on April 16, 2017

I feel like who the text messages were from was fairly obvious -- but I realized after the movie ended, the mystery of that wasn't the point. It wasn't really meant to be a mystery. It was just about how Maureen reacted to them.

I feel conflicted about the supernatural elements of this movie. I think some of the stuff in her brother's house could be seen as her delusions (especially the way she described the ghost later -- it sounded ridiculous and I think that was intentional). But some of the final scenes -- her brother's ghost dropping the glass in her sister-in-law's house, the scene at the end -- made it seem like, well, Maureen might be delusional but that doesn't mean ghosts aren't real. I like how many of the things are left up to the viewer to decide.

I really enjoyed watching this. I'm not sure if I liked it (although I'm pretty sure I did) but I'm glad I experienced it, if that makes sense. I would like to see it again.
posted by darksong at 6:46 AM on April 17, 2017 [1 favorite]

The swirly ectoplasm ghost in the brother's house seemed so different from the glass-dropping ghost at the end that I definitely think the first one was a hallucination. I totally cracked up at the brother's ghost sliding across the kitchen in the background, as if on roller skates.
posted by zeptoweasel at 2:06 PM on April 17, 2017

Just saw it, first thought: Nothing in this film can be trusted. This film cannot be trusted, because it refuses to be anything definable. Which makes it kind of perfect, I think. Otherwise it'd be just another split personality film.

Or is it just me?

No, I agree nothing can be trusted, really -- I think the shot in the hotel where we followed "nothing" out the door (including the automatic doors) was interesting. Was that Maureen's brother's ghost protecting her? Just a misdirection? Something else completely? I don't know. I don't need to know.

I guess that's sort of what I mean by that I'm glad I experienced this movie. It moves outside of "good" or "bad" or "like" or "dislike" for me. It's just its own thing and I have a lot of respect for it because of that.

(I like the Olivier Assayas movies I've seen -- I need to see more, though. They all seem to have their own rhythms and logic that makes them feel like they occupy their own reality.)
posted by darksong at 3:08 PM on April 17, 2017

If you want more Olivier Assayas, Kristen Stewart, and the possibility of the supernatural, then Clouds of Sils Maria is on Netflix and there's even a FanFare thread coughcough
posted by fleacircus at 7:34 PM on April 18, 2017

This, I thought, was a good article: The Spirit of Things: On Personal Shopper. On the scene where we follow the movement of nothing:

One way to read this scene is as indirect evidence of the presence of the ghost, invisible yet not undetectable. Another option is to see this sequence as studying the uncanny responsiveness, the sensitivity, of our various human products. There is something strangely vital in their repetitive automatism: the way the doors gasp open and the elevator announces its arrival. The camera, too, is a machine of human making, automatically registering the presences around it. In this way, the scene unfolds like a private interchange, a silent acknowledgment, between camera and objects, a glimpse of our world without us, the queer spiritualism of our objects.

Finally got around to watching this. It was really good! I liked it better than Clouds of Sils Maria in many ways. It felt like an evolution of it around a better story. CoSM was a little more fun to pick at in some ways though.

I am not sure what to think about this movie yet.88innnnn

KStew sure does a lot of tapping on glass.

I liked that this movie seemed like it could show anything it wanted. Like, I was afraid we'd never meet Kyra, but she was there and boring. I was afraid we'd never see Maureen's place. But it was there, and it was what it was. It's not all fucking overdone, color-leeched stuff. Things feel natural and deliberate at the same time to me. Paris is mostly a rainy place where a grubby Maureen mopeds and scowls. There's no text message popups; we see Maureen check her phone and type out the messages.

I mean I guess I read the last question in the movie as the "ghost" saying it IS just her, a manifestation of her fear. She is so full of fears, twitchy and jumpy. So she's more like a telekinetic who can project her fear or something. (I don't take the final thump as the cheeky answer to the "or" question.) The scene I really don't get is the climax at the hotel. Why does Maureen have the bags? Why does she take them to the hotel? What leaves the hotel? When the door opens, she seems almost relieved... like it's just a real thing, it's just Ingo. (Then the sliding doors.. her fears leaving the building?)

It's strange that the background noise is children playing sometimes, right before Maureen finds Kyra's body, and at the end right before she quizzes the ghost. Maybe there were other times I didn't realize because there were also kids playing out in the street IRL tonight lol. I wonder if it's just a technique, establish that kind of comforting sound of being among people as something to take away to emphasize quiet...

The scene with Lewis's "replacement", Erwin, was strange to me. Okay so Lewis seemed like he must have had some kind of cult leader status given the deference Maureen gets and how the idea of his ghost is holding up a sale of a giant mansion. To me, the replacement guy seems similar. He is kind of enigmatically pushy, trying to tell Maureen what she thinks or feels, trying to tell her to stay longer. He seemed creepy.

Even when she goes to her boyfriend she ends up following instructions, doing what she's told.. There's not really any escape. Even in the mountainous wastes there's going to be some glass messin w/ her apparently.
posted by fleacircus at 12:08 AM on January 1, 2018

We see the ghosts (both the fuzzy light kind of ghost and the apparition of her brother) independent of Maureen -- she doesn't see the latter at all -- so I feel like they're meant to be objectively real. Certainly there's no non-supernatural explanation for the ghost of Lewis other than we're delusional, too. If anything, the last line seems to underscore the absurdity of believing otherwise: how could the ghost tell her that it wasn't there? It could be that the presence is something Maureen simply willed into being, although honestly I'm not sure why that would be more rational than it just being a ghost. But along those lines, I do wonder if we shouldn't be so sure that Ingo killed Kyra; he is the most logical suspect, but if the malevolent presence Maureen first encountered is also real, who's to say Ingo was really to blame? Some kind of poltergeist generated by Maureen's repressed grief (and anger) may have acted in accordance with her hidden (forbidden) wishes.

I think the film is still extraordinarily satisfying without clear resolutions to these questions, though, and really that providing too many firm explanations would have been a mistake. We know just enough that no plot points seem off the wall or random (well: I'm not sure what the stuff with the jewelry was all about. I thought maybe Ingo had moved it to Maureen's place in an attempt to frame her for the murder, but that made less sense the more I thought on it). But we don't know so much that there's no mystery. And that seems very realistic to me, for a film about ghosts that wants to be taken seriously...we can't know.
posted by kittens for breakfast at 2:35 PM on February 8, 2018 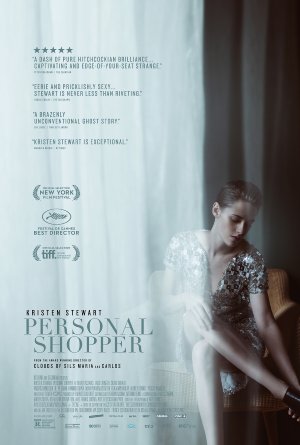