Holmes and Watson investigate the murder of a man Sherlock considered one of New York's worst private investigators.


AV Club lobs one across the plate with a B rating.

No Shinwell, though the aftermath of his attack is felt with Sherlock distracting himself with sexual partners and cleaning up the PI reputation and Joan distracting herself with cleaning and psychoanalyzing Sherlock.

Had a few Dexter like moments with Sherlock's careful examination of bloodsplatter both at the crime scene and at home.
posted by CMcG (5 comments total) 1 user marked this as a favorite
Sorry for the delay! I was so bored by this episode, I almost couldn't bring myself to post.

I'm not sure what it would take for Elementary to get back on track for me. It seems like past seasons had more interesting season long arcs and were also more about the interior life of the characters.
posted by CMcG at 10:30 AM on April 19, 2017 [2 favorites]

I liked Joan's bench in the Brownstone. And the worst private investigator reminded me of the 2010 British Dirk Gently series, not the new BBC America version (FanFare series page). In other words, I want to know more about that guy.

Pulled from the A.V. Club review, because I honestly couldn't remember much of the episode: “But like I said, it was the worst pitch of your life.” And with this, Joan Watson completes her transformation into The Hardest-Boiled Private Eye In The Entire World.

So we also had that. Really, without Lucy Liu and Jonny Lee Miller, it wouldn't have lasted this long.
posted by filthy light thief at 11:23 AM on April 19, 2017

Maybe the next case they should work on is why JLM gets so many damn colds.
posted by urbanwhaleshark at 3:34 PM on April 19, 2017 [3 favorites]

I too found this one boring. This whole season, actually. I'm afraid that for me the show has peaked. The year with Kitty was my favorite, followed closely by last year, with the Morland story. I find myself watching out of habit, and usually actually falling asleep several times while watching it, which makes me sad.

What ever happened to Watson's sister? Did she end up getting Morland's apartment? Where is Sherlock's girlfriend, Fiona? I really liked her. I find myself thinking about past characters and storylines while watching current shows, which is probably not good.

I did absolutely love that Sherlock chose to conduct the blood experiments in Watson's bedroom. Classic Sherlock.
posted by the webmistress at 8:09 AM on April 20, 2017

Sherlock broke up with Fiona earlier this season -- not that we got to see the breakup any more than we got to see the relationship, they just showed him deciding at the very end of an episode that he was going to break it off.

I too am just watching out of habit and wistfulness. I don't really hold out much hope that they'll pull out of this nosedive into dull CBS procedural land, but it was nice to see Kitty again, so maybe they can get it together to deliver a decent finale. (Series finale, hopefully)
posted by oh yeah! at 8:50 AM on April 20, 2017 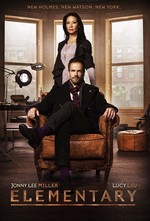