Sun moves ahead with her undercover mission, while Lito heads to Hollywood for the audition of a lifetime. Capheus prepares for his first big speech.


*As Riley flies back to London, Kala tells her she thinks she's figured out how to make the psi-blocker pill. They talk about Will, who is reeling from his father's death.
*Kala visits Wolfgang at the key shop. He tells her he's coming to Bombay, but she asks that they meet in some other city where no one knows them, and says she'll talk to Rajan that night.
*Whispers visits Will and needles him about his father, and Will drugs out to escape him.
*Lito has his Hollywood audition with Kit Wrangler, just as Sun needs his help in her gala-bartending test. Lito waves Sun away, does a lousy take of the scene, realizes that Sun's test is more important and makes her a flair-tastic side-car; and then she does a read of his "Iberian Dreams" scene which wins him the part.
*Lito, Hernando, and Dani go to Kit's ultra-Hollywood party. Lito gets a character makeover from the costume designer (by stripping Lito down to his thong and grabbing random clothing from other party-goers), then meets his future co-star, Blake.
*Hernando finds Lito on the beach, having a bout of imposter syndrome. Hernando gives him a pep talk, then they frolic into the ocean. "From queer to eternity!"
*At the rally, Capheus is daunted by the sight of the crowd, but is joined by the cluster, regains his nerve, and gives a speech on how love should build bridges not walls. There is a disturbance in the crowd and Capheus sees Superpower leaving, then someone throws a Molotov cocktail at the stage. Riot police arrive, and security begins to whisk Capheus away, but drugged-out-Will says it's a trap, and warns Capheus that 'security' has a knife, but is barely able to help Capheus fend him off. Superpower returns and shoots the knife-man, then kills a driver and has Capheus drive them away at gunpoint.
*Riley visits Will and tells him he needs to pull himself together, that this was too close, and he agrees. Capheus says he went a little crazy when his father was killed too.
*Will tells Capheus that Superpower isn't going to kill him (safety is on). Capheus doesn't understand why Superpower saved him, since he works for Mandiba and Mandiba must have been behind the violence at the rally, but Superpower says he has plans of his own. Capheus returns home to find his family, friends, and the KDRP waiting. He wonders if he should drop out of the race, but everyone says that his speech was perfect and that the people will know that Mandiba paid the demonstrators to cause the disruption of the rally.
*Sun prepares for gala, while Will shaves. Riley returns to Will.
*Joong-ki arrives at gala as Sun watches from her the bar. The cluster gathers to discuss how they can get Joong-ki out of the building and how/if they can get him to confess and clear Sun's name. They are all agreed that, one way or another, it ends tonight.
posted by oh yeah! (4 comments total) 1 user marked this as a favorite
When Hernando and Lito stripped down to roll around in the surf, I have to say for a moment I thought "thong underwear? Really???" But after that thought passed... fuck that was gorgeous and sexy and beautiful and funny and romantic and wow!
posted by dnash at 8:56 PM on May 7, 2017 [1 favorite]

Riot police arrive, and security begins to whisk Capheus away, but drugged-out-Will says it's a trap, and warns Capheus that 'security' has a knife, but is barely able to help Capheus fend him off.

I thought the cluster was a little hard on Will. He hooked himself on heroin to protect them. And then his father died, no doubt in part because he hit the booze again after his son was accused of being a terrorist and vanished. You think they would be ensuring that they were giving him a bit more support as he got clean.
posted by His thoughts were red thoughts at 11:09 PM on May 8, 2017

I think it's funny that I really like the actor who plays Lito but Lito himself is a bad actor.
posted by LizBoBiz at 9:48 PM on August 12, 2017

Heh, yes, an actor portraying a bad actor is all kinds of hilarity. But it's apparent that the roll for Iberian Dreams is something that he has to play closer to his real self, with all the vulnerabilities.

And I really enjoyed Andy Dick as an Oscars obsessed producer that's literally stuck it up his own ass. I find him offputting sometimes but he was so great here.

The beach scene was wonderful. I love that this show doesn't shy away from whatever the opposite of male-gaze is. Which reminds me, Dani herself definitely gets turned on watching Lito and Hernando go at it, and she's straight. It's a great statement about reversing the old trope of men and lesbians. Although there's plenty of lecherous men in this show, they're mostly served as caricatures (Puck, Vincent, even Felix, etc.), but lecherous women are shown more matter-of-factly, that they exist and can have just as much fun (Dani, Lila).

I also thought the cluster wasn't fair to Will at that point. I mean where was Sun and Wolfgang? They could've handled that situation for Capheus too.
posted by numaner at 4:49 PM on July 19, 2018 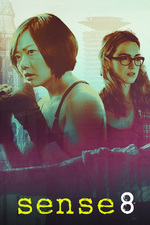