Cult film club: "I like that. Turn it up!" Performance is the Altamont of '60s cinema; psychedelic and hallucinatory, decadent and depraved, polymorphous-perverse. And you can dance to it! Melding the sex, drugs, and rock & roll ethos of swinging '60s London with the gangster film, Nicolas Roeg and Donald Cammell's genre-bending cult classic is so mind blowing that star James Fox did not act in a film again for nearly a decade.


Fox stars as Chas, an "out of date" enforcer for crime kingpin Harry Flowers. Chas is a "nutcase," who likes "a little cavort," but when he kills someone he wasn't supposed to, he is forced to go on the lam. He takes refuge in a basement room belonging to Turner (Mick Jagger), a former rock star who has "lost his demon" and now lives as a recluse in his dilapidated house with his secretary/lover, Pherber (Anita Pallenberg, who was Rolling Stones bandmate Keith Richards' girlfriend at the time), and an androgynous French girl (Michele Breton). They enjoy a little cavorting themselves. In these drug-strewn surroundings, worlds collide and identities merge. "I know who I am," Chas tells Harry early on. He (and viewers) will become less sure as Performance unfolds. Completed in 1968 but shelved for two years, Performance was originally rated X and has been redesignated R. But it's still strong, potent stuff. With its elliptical editing, mirror images, and echoed dialogue that bridges the two worlds, Performance may not become clearer with repeat viewings, but there are fresh discoveries to be made each time. The killer soundtrack features Randy Newman, Ry Cooder, rap revolutionaries the Last Poets, and Jagger's own astounding "Memo from Turner." "I know a thing of two about performing, my boy," Turner tells Chas at one point. "The only performance that makes it... that makes it all the way, is the one that achieves madness." Performance makes it all the way. As Roeg is quoted in a featurette produced for this DVD, "After all this time, its mystery is part of its magic and attraction." 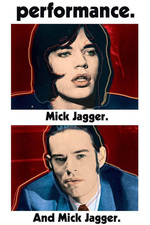