A biopic of Temple Grandin, an autistic woman who has become one of the top scientists in the humane livestock handling industry.


A Wikipedia summary of the critical reception gives a good overview of responses to Temple Grandin:

Upon its February 6, 2010 debut, Temple Grandin received positive reviews from critics, including a Metacritic score of 84/100 (averaged from 19 critical reviews). Review aggregator Rotten Tomatoes gives the film a 100% approval rating, based on 6 reviews.

Entertainment Weekly's Jennifer Armstrong wrote, "The beauty of [the film] is that it makes the title character's autism — and the unique insight it gave her into livestock psychology — relatable to anyone with a heart, and fascinating to anyone with a brain. The fact that it does so with such a singular story only makes the movie that much greater."Alessandra Stanley of The New York Times called it "a made for-television biopic that avoids the mawkish clichés of the genre without draining the narrative of color and feeling. Ms. Danes is completely at ease in her subject's lumbering gait and unmodulated voice. She makes Temple’s anxiety as immediate and contagious as her rarer bursts of merriment... And as the character ages and learns more social graces, Ms. Danes seamlessly captures Temple's progress."

Robert Bianco of USA Today wrote that unlike many other HBO productions, "Temple is an incredibly joyous and often humorous film." While praising the direction and the strong supporting cast of Catherine O'Hara, David Strathairn, and Julia Ormond, Bianco declared that "as good as everything is around them, Temple Grandin belongs to two women: the real Temple, who appears to be a spectacular human being, and Danes, who is clearly a spectacular actor."The AV Club's Noel Murray, himself the father of an autistic son, wrote that "some of the movie's aesthetic choices border on the cliché. The pulsing minimalism of Alex Wurman's score has become as much a shorthand for 'intellectual mystery' as Arabic wailing has for 'Danger! Terrorists!,' and Temple Grandin's illustrative animated sequences run a little too close to A Beautiful Mind for my taste." However, Murray gave the film an A-, in part for Danes' success in portraying Grandin as a full-fledged personality instead of "a checklist of symptoms gleaned from a medical journal."

NPR's David Bianculli unambiguously named the film "the best tele-movie of the past several years... I can't praise this movie highly enough. It's not maudlin or sentimental, but it is excitingly inspirational. It scores big emotional points with very small touches, the sound of a heartbeat, a tentative touch, a victorious smile. The acting, writing, directing, production values, every sight and every sound in HBO's Temple Grandin is perfect."

More about Temple Grandin's development, production, and accolades at Wikipedia.

The moment where Danes as Grandin bursts into song at the podium at her graduation - awkward at first and then it's wonderful both as a marker of Grandin's achievement and self-acceptance and as a great acting moment for Danes.

Danes recently appeared on WTF with Marc Maron. Should still be a free download.
posted by Sheydem-tants at 2:25 PM on September 29, 2014 [1 favorite]

I found this pretty compelling if quite straightforward as a biography. Claire Danes was great and I really haven't followed her over the years so it was exciting for me to learn she can act.

Most striking to me was what a feminist movie this was. That was the strongest message part of the movie for me. When do you ever see a movie about a woman that has zero romantic plot? Quirky women are usually only quirky in service of being hot to guys (manic pixie dreamgirls) and when we see women in movies who are talented, they must generally be talented in ALL arenas: brilliant AND socially graceful AND sexy. It was pretty unprecedented to show a woman who is at the top of her (weird, nerdy) intellectual specialty and not have to bother with also making her hot. There are problematic things about that from the point of view of de-sexualizing people with disabilities but I thought the movie was a net positive for everybody it was portraying.
posted by latkes at 3:07 PM on September 29, 2014 [3 favorites]

Link to the WTF episode with Danes.

Claire Danes was fantastic as Grandin, and the production was interesting. The illustrations of Grandin's view of the world were nice additions to the over-all structure and style, without being gimmicky.

More thoughts from the movie: How does one survive on jello and yogurt? And what kind of school that specializes in "unique" children fails so miserably at providing a safe and pleasant place for really unique children to learn? (Then again, if autism was so mis-understood as to be thought to result from lack of motherly attention and require institutionalization, the world was a different place then. Categorizing autism with infantile schizophrenia is even scarier.)

I really like the line "Nature is cruel, but we don't have to be."

Here's a nice interview with Temple Grandin and Claire Danes.
posted by filthy light thief at 3:07 PM on September 29, 2014 [1 favorite]

In a previous phase of my life, I had the fortune to spend a little bit of time with Temple. Temple loves (at least as of a few years ago) how this movie turned out, which is probably part of why I really enjoyed it even though biopics aren't typically my thing. It was just fun to hear how fun Temple found it to be to watch her life, and see visually depicted some of the things about her visual processing that she's been trying to translate into words for so long.

I haven't rewatched this since shortly after it came out so I can't say anything more specific than that, just that Temple likes it so much that her response made me like it too, and that's no small feat.
posted by Stacey at 12:34 PM on September 30, 2014 [3 favorites]

I saw her at a news stand in O'Hare. She was telling the guy behind the counter about how she'd been served sea slugs at dinner in China and didn't care for them.
posted by brujita at 5:05 AM on October 1, 2014 [1 favorite]

So this was one of my favorite biopics I've seen in the last 4 years - I thought it was brilliantly put together, here are a few random thoughts: Overall a very satisfying viewing experience, I was rooting for Grandin the whole way and I think that is probably a typical response to the film.
posted by joseph conrad is fully awesome at 8:40 PM on October 6, 2014

I meant to say I thought David Strathairn was very good as the mentor, and Julia Ormond as well as her mother. That scene with Ormond and Grandin where she has to keep turning her head from the sparkly chandelier was difficult to watch.

Loved the squeeze box discovery and research as well - nicely unveiled during the film and the other students trying it out and giving feedback was entertaining.
posted by joseph conrad is fully awesome at 8:46 PM on October 6, 2014 [1 favorite] 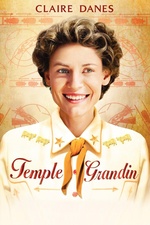