A man is shipwrecked on a deserted island and encounters a red turtle, which changes his life.


Wikipedia: The Red Turtle (French: La Tortue Rouge; Japanese: レッドタートル ある島の物語, or "Reddo Tātoru: Aru Shima no Monogatari") is a 2016 animated fantasy drama film co-written and directed by Dutch animator Michaël Dudok de Wit and produced by Toshio Suzuki from Japan. The film is a co-production between Wild Bunch and Studio Ghibli, and tells the story of a man who becomes shipwrecked on a deserted island and meets a giant red female turtle. The film has no dialogue. It premiered in the Un Certain Regard section at the 2016 Cannes Film Festival. The film was nominated for the Best Animated Feature Film for the 89th Academy Awards.

Official Site: French, Japanese
posted by jazon (4 comments total) 1 user marked this as a favorite
It's beautiful, but that's the general assumption from anything where Studio Ghibli is involved.
posted by filthy light thief at 10:21 AM on September 25, 2017

I saw this a while ago, and it left so many questions. In a vain hope to find what others saw it as, I got fantasy, bestiality, near-death experience and just enough to realise that was my decision to make.

Beautifully animated, and very rewarding.
posted by arzakh at 2:18 AM on September 26, 2017 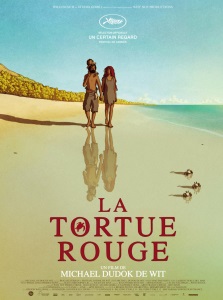