Babies, also known as Baby(ies) and Bébé(s), is a 2009 French documentary film by Thomas Balmès that follows four infants from birth to when they are one year old. The babies featured in the film are two from rural areas: Ponijao from Opuwo, Namibia, and Bayar from Bayanchandmani, Mongolia, as well as two from urban areas: Mari from Tokyo, Japan, and Hattie from San Francisco, USA.
posted by ellieBOA (5 comments total) 9 users marked this as a favorite
this is extremely good

I appreciated seeing how loving and yet how casual the Namibian and Mongolian mothers were. Kid poops on your knee, you wipe it off with a corncob. Kid's tied to the table, he pisses where he's at. They're fine!
posted by Countess Elena at 12:37 PM on September 30, 2017

I have seen this 10-12 times thanks to my own child's obsession with the film when she was about 2-4 years old. It is a perfectly balanced documentary, and their decision not to add voiceovers or text or explanations, but simply to show babies discovering the world around them makes it so good. Each baby has a particular colour palette from the world they live in - Tokyo is blue-grey, the US gets beige-pale colours, Namibia gets oranges and reds, and Mongolia has green and sky blue.

Seriously great to watch with a small child.
posted by dorothyisunderwood at 10:50 PM on September 30, 2017

By contrast, I had to chuckle with how Ponijao dealt with her big brother taking something from her - she BIT him.
posted by EmpressCallipygos at 11:00 AM on October 3, 2017

Correction - how Ponijao dealt with HIS big brother. My bad.
posted by EmpressCallipygos at 11:03 AM on October 3, 2017

I wonder if it is true that growing up around animals reduces your chance of having asthma or allergies. The Mongolian and Namibian babies sure have plenty around. Donkey races are much more fun looking than any Hotwheels.
The yurt was the house I most wanted to live in.
posted by Bee'sWing at 6:32 AM on October 8, 2017 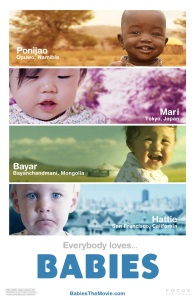