A former client returns to Sterling Cooper. Betty takes the kids on a trip. Joan and Greg plan for their future.
posted by Sweetie Darling (8 comments total)
It's so weird to think of Roger in Paris in the 1930s, a la Hemingway* or Casablanca. In fact, I can't imagine a young Roger at all. I'm pretty sure he was born in a gray three-piece suit.

Is this the one time in the series that when confronted with his past, Don doesn't try to run? Or at least think about running? I mean, it would've been so easy, he's got Suzanne out in the car waiting for him...

There's definitely a moment where he thinks about it, as he walks from the office into the kitchen, shell-shocked. But as Weiner said in the commentary, this is a man who's had an atomic bomb go off in his life; he doesn't know what to do and probably doesn't remember there's someone waiting for him in the car.

This episode, and the next two, are arguably the best of the series. Anyone who says that January Jones can't act (and I've been one of them) should watch them. And Jon Hamm, my goodness ...
posted by Sweetie Darling at 1:35 PM on October 6, 2014

I have this theory that you can decode at least half the show's themes via scarf imagery.
posted by The Whelk at 5:04 PM on October 6, 2014

Scarves have this unusually high import for female characters on this show, a matrony scarf, a luxurious Herme, the headscarf of both gupsys ( read, actors) and married women.

It's an interesting through line, if only cause scarves are still associated with old fashionness.
posted by The Whelk at 5:21 PM on October 6, 2014

It's so weird to think of Roger in Paris in the 1930s, a la Hemingway* or Casablanca. In fact, I can't imagine a young Roger at all. I'm pretty sure he was born in a gray three-piece suit.

Exactly. I enjoyed getting this particular back-story on Roger.

Joan helping Greg prepare for his interview:
Joan: "What experience have you had with psychiatry?"
Greg: "That's kind of personal."
Can you imagine Greg as a psychiatrist? Depressing and hilarious at the same time. Of course I doubt he would have ever made it through the program.

Goddamn. I've never felt like the Dick Whitman stuff is anywhere near the strongest element of the show (in fact I mostly feel like it's the kind of early-series high-concept decision making that doesn't actually fit the tone of the show at all, for the most part, but hey, they got locked into it) but the Don/Betty scenes in this episode are probably enough to make it all worthwhile. Jones and Hamm just do SO. MUCH. in this episode, helped along by the fact that they're both right, for the most part, but Don's cowardice in never offering up this information freely earlier means that Betty can't be expected to meet him halfway.

Because honestly (and this is one of my issues with Don's backstory) it's hard to say that he really did anything wrong. He took another man's identity but didn't hurt anyone in doing so, and in fact has the dead man's widow's blessing in the matter. He didn't even act nefariously, just taking an opportunity that the Army handed him. And really, considering Lane's bit in the previous episode about how in America nobody asks where he went to school, Don's actions seem subversively heroic. He was able to grab an chance and make something more of himself using his talents and unburdened by his past (in which his crime was what, exactly? Being a poor whoreson? Again, completely sympathetic.)

This is another problem I have with the Dick Whitman stuff. Most shows, including very very good shows, can get away with painting their themes in bright red on the side of their trailers. Community, for instance, was groundbreaking and wouldn't have worked if they didn't do that. But Mad Men is such a combination of Cheever stories and televisual tone poems that when it underlines anything it feels cheap. (Doubly so when it makes obvious nods to what we know about history but the characters wouldn't. The Jai Alai story was a great example of the show doing this correctly, because everyone but Ho-Ho knew that the sport would never take off.) So I really hate the "And who are you supposed to be?" ending line, because it's too cute in a show that generally trusts us more.

But, again, goddamn that sequence with Don and Betty. Don's not a good man (he leaves his mistress in the car for the night when presented with what his wife knows, for starters) but I love so hard his bringing the photos up and telling Betty everything. Especially about Adam. Like with Pete being unable to pretend like things are okay to Trudy a few episodes ago, Don could have left things simpler, stopped at "he died" or even "he killed himself" but needs to tell her what his need to hide his past led to. And she's sympathetic and supportive when he does. She's going to Reno in a couple episodes, and definitely came into this conversation needing leverage with which to leave him for Henry, but in this moment, they are a functioning couple despite all odds. And they are the next morning as well.

And as the old AVClub review points out, it's probably not an accident that Don has a meeting with United Fruit lined up. Normally that would be the kind of whale that a season-long arc would be about (probably on the level of Hilton, really) but here it's because United Fruit managed to fix their massive and well-deserved PR problems via a rebranding into Chiquita. Sad that Annabelle of Caldecott Farms couldn't realize the value in that.
posted by Navelgazer at 6:03 PM on February 3, 2020

Oh, and one more thing. Don and Roger are both serial philanderers, but I think we see a key distinction between them come into focus in this episode. Don is what we would probably now call a sex addict. Roger, however, seems to be more like a polyramourous. It's very difficult to imagine Don in Roger's shoes this episode (having a nice if combative evening with the woman who broke his mid-twenties heart, and then her drunkenly throwing herself at him) not ending in a spiteful and ugly hatefuck. Roger seems to have sex much more closely tied to love, though, and sure, he had a heart attack fucking an actress, but his affair with Joan was built on actual caring and admiration for her (as this episode shows, he knows that's not coming back but he also wants to do what he can for her. I love that bit about how it's nice to be on some people's minds.) His interactions with Mona never seem to be less than cordial and understanding, and he doesn't want to cheat on Jane, at least yet.

Don likes the drama and conquest and narrative because it's a totem of his success and the dragon he'll never stop chasing. He needs to be loved because he wasn't as a child. Roger for the most part seems to truly love being into someone. If you were going to have an affair with one of them, Roger seems like he would be the more fulfilling partner. It makes sense that one of them is in accounts and one in creative, really.
posted by Navelgazer at 6:14 PM on February 3, 2020 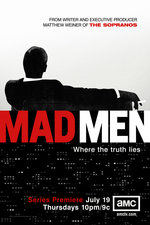