At the PRIDE gala, the kids set in motion a plan to expose their parents for good. As the evening progresses, everyone's personal drama threatens to drive the plan off course.


There were some odd/questionable motivations in this episode from the kids, but I'm chalking it up to teenage drama. Like I couldn't really get a read on what Karolina's reasoning was for how she was acting moment to moment. I get that it's a big burden to suddenly realize you have powers, but the sexual-preference stuff came out of left field for me. Thinking back, I did notice that she was asking mostly the girls for help when she needed it. But then her little spat with Gert outside the gala didn't make sense unless it's Gert that she's into. The show is, at times, trying so hard to be subtle and secretive about some things that it gets confusing, or maybe it's just bad acting and dialog writing in general.

Everything else is working out fine though. I'm fully enjoying the adult dramas, which I wasn't expecting to enjoy since the first episode. And hot damn Julian McMahon can play evil (he was actually my favorite part of the 2005 Fantastic Four, as well as when he goes the less than ethical routes on Nip/Tuck).
posted by numaner (7 comments total) 1 user marked this as a favorite
The longer the show goes on and the more flashbacks we get, the less it seems like the Pride knows what the deal that they made even is. This week's flashback had most of the Pride surprised to learn what was happening to Brooks. Last week Victor tried to show Chase the future of Los Angeles, which would have been a remarkably bad idea if he had any idea what that future was likely to be. It's possible that this is an intentional change from the comics, making the Pride less a group of supervillains and more a morally compromised gathering of dupes. I'm worried, though, that it's going to turn out that the writers just didn't put a lot of thought into what they were writing.

Since Tina Minoru was in the Doctor Strange movie, it would seem like her explanation to Nico that the Staff of One is technological rather than magic is an obfuscation, but I'm not sure to what end. Again, I'm bracing myself for the possibility that the writers don’t think we'll notice or just don't care if we do.

I get that it's a big burden to suddenly realize you have powers, but the sexual-preference stuff came out of left field for me.

Karolina had previously displayed some interest in the girls dancing together at the house party she attended, but I can see how viewers could have missed it if they weren't specifically looking for it.
posted by Parasite Unseen at 12:11 PM on December 15, 2017 [1 favorite]

I mean, maybe Tina is trying to gaslight Nico. Use all the obvious spells now, and you can't have them in battle. But that's such a long con that relies on luck. Hope she's used the spell that's most expedient in battle?

Or is it only the Staff of One for Nico, because she only has 50% of her mom's DNA?

In the moment, I really enjoyed the episode. Maybe I have always wanted the PRIDE story, rather than the Runaways. But stepping back, I'm not loving the translation from the material to the screen. The sympathetic PRIDE members might be a great third season arc. Reflecting on the reasons your parents went evil, and trying to decide if you can have a relationship with your parents. But right now, I want the parents to be flat enough, the kids have to figure out who they are without their parents. The writers seem too worried that we won't care about the kids without their charming villain parents. And the longer we keep on those training wheels, the longer I believe it.
posted by politikitty at 12:50 PM on December 15, 2017

I’m really not digging this series like I should. The actors are all great. It’s the writing I’m hating. I don’t know why they seem insistent to turn into a generic teen show. (Albeit with dinosaur.) And honestly the name just doesn’t make sense unless they, you know, run away! It’s all moving too slowly. Ugh. I’m so disappointed.
posted by greermahoney at 12:57 PM on December 19, 2017 [1 favorite]

I'm mostly taking the show for what it is, having never read the comics, and that this is perhaps the introduction season to why they eventually become runaways. It's surely a teenage drama, but it also has a lot of adult drama. It actually reminds me of The OC and One Tree Hill, but with scifi stuff. That's not a bad direction to take if you want to draw people in. It's not as tightly scripted for family situations as The Gifted, but it's still decent.
posted by numaner at 9:07 PM on December 19, 2017

I have this suspicion that I like the show that the title sequence/music promises more than what is actually delivered, but I've not quite realized it yet.
posted by Ivan Fyodorovich at 12:43 AM on December 22, 2017 [2 favorites]

Yeah, the further into the season we get, the more I realize what the title sequence scenes are - "That's the Staff of One. And there's Karolina all lit up. And a dinosaur. Neat!"

I'm enjoying it more than I expected I would. While I like the Gifted for the mutant universe, this is more interesting even if it's kind of ... teen drama, yeah I guess? I dunno, I stuck with Arrow for long enough, I'm not exactly highbrow.
posted by Kyol at 5:58 PM on December 26, 2017

the sexual-preference stuff came out of left field for me

Not for me! In addition to the dancing scene mentioned above - which was the moment she decided to take her bracelet off - she's given Nico several Very Significant Looks that I've noticed over previous eps, including looking disappointed when she saw her making out with Alex, and a hug where her face did this whole 'waaaaait a sec' thing...
posted by showbiz_liz at 12:00 AM on February 13, 2018 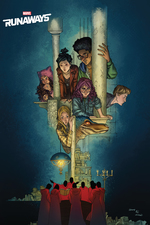