To prevent Iran from going nuclear, intelligence officer John Tavner must forgo all safety nets and assume a perilous non-official cover ("NOC") — that of a mid-level employee at a Milwaukee industrial piping firm.


Wikipedia: "Patriot is an American comedy-drama created by Steven Conrad for Amazon Video in 2015. The first season consisted of ten episodes with the pilot premiering on November 5, 2015. The following nine episodes of the first season were released on February 23, 2017.

On April 18, 2017, Amazon renewed the series for a second season."
posted by Catblack (7 comments total) 1 user marked this as a favorite
this show is very very very good. i’m not sure ten individual posts for each episode is the best way to facilitate discussion.
posted by JimBennett at 4:22 PM on January 16, 2018 [2 favorites]

it did lead to the amusing incidence of "Patriot: Dick Cheney" on the main page, I mean wtf!
posted by sylvanshine at 8:09 PM on January 16, 2018

I loved this show, but several months ago, so I might have to rewatch before commenting, but thanks for posting episodes, so many of these deserve discussion!
posted by OHenryPacey at 9:39 PM on January 16, 2018

I just started watching this show. I'm up to Episode 4 and it is amazing. I don't even know how to describe it. Comedy? Drama? It's about a CIA-type guy but it's... bizarre? It's filled with "hey, it's THAT guy!" type actors but the only one I really know is the guy from Lost.

I don't even know how to describe it. Comedy? Drama? It's about a CIA-type guy but it's... bizarre?

I just picked up this show, thanks to mis-attribution for promoting Patriot, and upon reading this comment, I'll say it, after the first episode, has more overlap with Barry (FF page) than anything else that comes to mind, because it's about a

✔️ Government-sanctioned killer, who
✔️ Is having issues with being a killer
✔️ (Sometimes, but not always, because he's good at that part of military work, and it makes him feel valued/ effective),
✔️ With inter-personal drama, and
✔️ a bit of casual/ almost humorous violence and semi-absurd coincidences (though the violence isn't without consequences).

But it's not slapstick violence (and limited consequences) on the level of Happy! (FF series) -- it's more ... grounded? Real-ish? Except there's the absurdly honest folk music, which pushes it back into Barry territory.

Barry has more humor in it, but that isn't to say this is a serious show. Barry also has a much better gender balance and representation.

The more you know 🌠 (my thoughts on this topic)

I know, right? Always great seeing Julian Richings work. Although I mis-remembered Michael Chernus for someone else entirely (when I normally mis-remember Pete Postlethwaite for Richings).

otoh, being 'government sanctioned' really shouldn't precede the word 'killer' so there's that bit of gourmet flavour of angst.

I'm digging the toned back humour here, similar to the comparison of the violence level with Happy; it's more believable, better verisimilitude, but still unexpected humour than the more contrived situations/ dialogue in Barry and Happy.

I'll say it, after the first episode, has more overlap with Barry (FF page) than anything else that comes to mind

I just started watching this last week and not_on_display is watching Barry (which sounds too dark for me to watch) and it's funny to be talking about the shows and be like "That is happening in MY show..."
posted by jessamyn at 4:01 PM on August 28, 2019 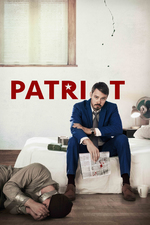