A group of professional bank robbers start to feel the heat from police when they unknowingly leave a clue at their latest heist, while both sides attempt to find balance between their personal and their professional lives.


Vulture: This isn’t just a cops-and-robbers story or a standard neo-noir. It’s a movie about men and women, about loneliness and alienation. By pushing at the edges of the genre, by going beyond the thrills and exploring — maybe even indulging in — the emotional lives of his characters, Mann presents a distinct vision of the world, one where connections between people happen on an intuitive level even before they happen on a narrative one.

NYTimes: Al Pacino makes an unusual, not to say traffic-stopping entrance in Michael Mann's "Heat," in which he plays a police detective in the grip of strong passions. Mr. Pacino is first seen in bed, making heartfelt love to a woman the viewer can't quite see. The sight of his face conveys intensity, naked emotion, and something even more interesting: Mr. Mann's rare ability to reel in his audience with ingenious visual hooks. "Heat" offers nearly three hours' worth of such carefully offbeat glimpses, sights that explode ordinary expectations and do for visual imagery what the sound bite does for words.

Deep Focus Review: Only after Mann earned vast acclaim and box-office success for The Last of the Mohicans was the theatrical feature Heat possible. The basis for Mann’s screenplay, written years earlier, was a true story relayed to him by Adamson in the 1970s. In his Chicago years, Adamson tracked and, in 1964, killed a professional thief and ex-Alcatraz resident named Neil McCauley whom Adamson greatly admired. While hunting McCauley, Adamson met him for coffee and they shared a conversation. The cop found the crook to be as intelligent and as resolute as himself, and he thought that perhaps in another life they might have been friends. Still, when he eventually confronted McCauley at the scene of an armored car robbery, Adamson shot and killed his opponent during a gunfight. Fascinated by the notion of a cop who admires a thief and the duality of that admiration, Mann wrote a script based on Adamson’s story and first produced it as a TV movie in 1989 called L.A. Takedown, although the outcome contained few of Heat’s many dramatic subplots and almost none of its precision filmmaking. Later, Mann showed the expanded script to producer Art Linson (The Untouchables), and they agreed to develop the material into a feature. Linson pursued his frequent collaborator Robert De Niro to star, while Mann sought Al Pacino. Both powerhouse actors at the height of their respective careers, when De Niro and Pacino signed on the film was greenlit with a budget of $60 million, a number that was more than tripled at the box-office.

Rolling Stone: [Mann]: McCauley has all these layers and dimensions below the surface, as well as an internal monologue going on inside his head about, "This is how you're supposed to be," and that was clearly De Niro. Then Hanna is more explosive and volatile; his volatility is street theater, it's how to intimidate an informant and keep them completely off their guard, because they have no idea what you're going to do next. So it's all tactical — and that was clearly Al.

Roger Ebert: De Niro and Pacino, veterans of so many great films in the crime genre, have by now spent more time playing cops and thieves than most cops and thieves have. There is always talk about how actors study people to base their characters on. At this point in their careers, if Pacino and De Niro go out to study a cop or a robber, it's likely their subject will have modeled himself on their performances in old movies. There is absolute precision of effect here, the feeling of roles assumed instinctively.

EmpireOnline: The film gained immediate credence for pairing these two acting colossi for the first time (they didn't share screen time in The Godfather Part II). Ironically, and pertinently, they share little screen time here. Three scenes, in fact, in a near-three hour epic. Yet the famous coffee shop sequence is the foundation for the whole film. On the surface just a superficial conversation — two guys shooting the breeze — it's actually the delicate dance of two disparate souls finding a connection. "It was take 11," recalled Mann at the time. "There were some harmonics and nuances that are almost impossible to describe. The interplay is like two master musicians playing a duet."

The film discovers the most honest relationship in the understanding between the principal foes. They are yin and yang, a mirror image of one another. One based on emotion, all hot-wired reaction and gut instinct. The other is controlled and risk-averse, an individual with his emotions tightly reigned in. With sublime irony, expectations are laid back to front—the cop is the wild cat, adrenaline junkie; the thief the nerveless thinker. Two polar variations on the obsessive 90s' male, and it is through Hanna's understanding of his foe that he will finally snare him.

Slant: But these characters don’t know how to do anything else, and don’t much want to either. It’s a sentiment that lies in the tradition of American individualists (its no mistake that Mann previously adapted James Fenimore Cooper’s The Last of the Mohicans). It feels good to be good at something. There’s something comforting about applying knowledge to the point where it becomes instinct, and if these guys weren’t cops or robbers we could admire them the way we admire the mechanic who fixes our car when it’s broken down. A person is attractive when they do what they like, and do it well. That doesn’t mean they’re easy to live with, as Hanna and McCauley prove time and again, unless you happen to be working with them and speaking their language.

How Research Created a Classic Thriller

Reed Farrell Coleman to write Heat prequel novel
posted by MoonOrb (16 comments total) 12 users marked this as a favorite
Tom Hiddleston has seen the restaurant sequence a few times.
posted by cgc373 at 9:22 PM on February 4, 2018

I can say without hyperbole that Heat is the greatest movie in the history of civilization.
posted by kirkaracha at 9:36 PM on February 4, 2018 [3 favorites]

I keep hearing that, and this will be my third time watching it to try and see if I can figure out what the fuss is about.
posted by rhizome at 11:19 PM on February 4, 2018 [6 favorites]

I saw this movie a year or so after it came out. My friend and I drove almost an hour and a half to see it in a theater with $1.50 matinees. One of my better $1.50 experiences.

I’ve always preferred De Niro to Pacino in this one but it’s really Tone Lōc‘s movie.
posted by ActingTheGoat at 3:05 AM on February 5, 2018 [1 favorite]

I’ve seen this movie like twenty times. I met my husband in a bar and after finding out in our first conversation that he also adored this movie I decided to give him my number.
posted by sestaaak at 8:08 AM on February 5, 2018 [1 favorite]

Heat: The Perfect Blend of Realism and Style (Nerdwriter)
posted by CheesesOfBrazil at 9:25 AM on February 5, 2018 [1 favorite]

I once described this movie in an email as "most alienatingly masculine movie ever made. But not masculine in a cartoonish way, like Predator or Bloodsport, but in a very real, uncomfortable way. Like getting into a fight with your dad on a fishing trip, and then driving home together in total silence."

It's an excellent movie, as one of the purest demonstrations of the ideal of American masculinity: always choosing competence over empathy. But as incomple notes, that makes it really unpleasant to watch! I prefer Ronin, which has a gentler European take on the same ideal with the same vital components (it would seem) of high-adrenaline car chases and shootouts. But you cannot deny the quotability of Pacino's coked-out detective from Heat, which provided the ultimate payoff in this scene from New Girl.
posted by lefty lucky cat at 11:19 AM on February 5, 2018 [6 favorites]

I had a chance to see this in the cinema last year for the 4k remaster and it was such a great experience to see it up on the big screen again.

I've seen it every few years since it came out but for some reason watching it projected in 2017 it really clicked that the whole movie is "Toxic Masculinity: The Film". All the characters could be happy and functional if they just let go of their pride and cared about other people more than their jobs. Everyone. Even the smaller side stories. It's men fucking up their lives and the lives of those around them and justifying it with "a man's gotta do what a man's gotta do".
posted by slimepuppy at 11:53 AM on February 5, 2018 [4 favorites]

It came out on VHS my freshman year in college and we watched this sooo many times.

I love the percussive theme song during the high tension scene(s?) and sometimes hear it in my head when I'm in a tense situation.

Even after all the action scenes, the finale in the airfield was an intense game of cat and mouse, especially after McCauley demonstrates the courage of his conviction at leaving Eady at the hotel.
posted by porpoise at 3:19 PM on February 5, 2018

I like crime movies, and heist movies, and I'm okay with Michael Mann, but I really didn't like this movie much. It's probably mostly because of Pacino--both his acting and his character. Pacino sucks in this, and his character's family life is a drag for no good cinematic reason. Maybe it's also the heist crew, who seem so lifeless with not much going on. It's "realistic" but its characters don't feel real. De Niro's posturing is stoic to the point of half-heartedness.

Like, IDK, I thought Ronin was a much better movie than this, but I didn't think Ronin was that great. HEAT's like a big cup of nothing.
posted by fleacircus at 7:00 PM on February 5, 2018 [2 favorites]

De Niro's posturing is stoic to the point of half-heartedness.

Toxic Masculinity: The Film indeed. As a perennially single person I have always had a fondness for DeNiro's "I'm alone, but not lonely" but I don't really see shooting up downtown Los Angeles as a calm and reasoned argument against therapy and a better social safety net.
posted by ActingTheGoat at 10:18 PM on February 5, 2018 [2 favorites]

I remember admiring the craftsmanship of it but not much else. I think I would've enjoyed it more had the few women in it hadn't been such nothing characters. I am curious, though, how I'd feel about it now, despite not having much desire to watch it again.
posted by darksong at 11:17 AM on February 6, 2018

the final waltz of the cyborgs: guns, cars and planes, Lawrence Russell
posted by the man of twists and turns at 8:20 AM on June 27, 2019

Like, IDK, I thought Ronin was a much better movie than this, but I didn't think Ronin was that great.

At least with Heat you don't have to tolerate De Niro's pronunciation of Hereford, which ruins the entire credibility of his character in Ronin.
posted by biffa at 3:30 PM on April 4, 2021 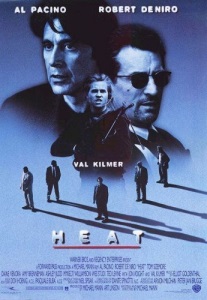