Chris is a once promising high school athlete whose life is turned upside down following a tragic accident. As he tries to maintain a normal life, he takes a job as a janitor at a bank, where he ultimately finds himself caught up in a planned heist.


Rolling Stone: A guy with brain damage, his blind roommate and a bank ripe for robbery. Doesn't sound like much. But wait till you see the spellbinding work that Scott Frank makes of it. If you don't know Frank, he's the screenwriter who crafted two of the best-ever adaptations of Elmore Leonard novels, Out of Sight and Get Shorty. Now, in a knockout directing debut, Frank cooks up his own mischief. The web he spins will pull you in. Guaranteed.

NYTimes: With its country music characterizations and its wintry panoramas (by the snow specialist Alar Kivilo, who also shot “A Simple Plan”) “The Lookout” feels less like a modern film noir than a social drama with noir trappings. Several major characters live with mental or physical afflictions (even Gary, who carries the go-to accessory of modern screen goons, an inhaler). The potential haul is pocket change compared to the amounts bandied about in Jerry Bruckheimer epics, and some of the participants seem as though they would back out if they sensed there was another quick way to improve their social station.

BBC: But while Chris' disability is essential to both plot and character interest, the details of his symptoms are unclear (would he be allowed to drive, for instance, if he can't remember how to open a tin in the kitchen?). So despite the resemblance, this is no Memento. Still, thanks to suspenseful scenes and top-notch performances, it's a cracking little thriller all the same.

AV Club: It may sound like a stretch for Gordon-Levitt to take part in the crime, since his conscience has been stirred in the years following the accident, but the film underlines his need to feel functional and necessary again, even if it's in the service of something wrong. In a magnificently subtle piece of work, Gordon-Levitt never presses his character's mental and physical limitations to actorly effect, yet he carries them across anyway, all while suggesting that his past mistakes are equally crippling. The Lookout's thriller elements could stand to be more surprising, but they're ultimately in service of a better understanding of the characters. Usually, it's the other way around.

27 Things We Learned From "The Lookout" Commentary

Filmmaker Magazine Interview with Scott Frank
posted by MoonOrb (5 comments total) 1 user marked this as a favorite
Saw this in the theater and not since. But I recall really liking it and it motivated me to seek out Brick on dvd.
posted by phearlez at 8:27 PM on March 21, 2018

Always meant to watch this as I like JGL & Jeff Daniels and I need to check it off my Movies Made In Winnipeg List, but it's not on Canadian Netflix anymore, boo.
posted by Alvy Ampersand at 8:51 PM on March 21, 2018

What a good movie. It's small scale but that's a benefit, not a detriment. It just becomes more powerful due to its intimacy.
posted by Monochrome at 3:18 AM on June 23, 2019 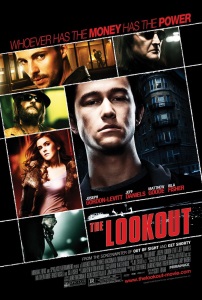