Alma and an increasingly self-destructive Bullock face an abrupt decision on their future. At the Gem, while Swearengen readies for another showdown with Bullock, infighting between Silas Adams and Dan Dority yields more feed for Wu's pigs. Doc Cochran is surprised by Calamity Jane, who has returned to camp in a state of inebriated deterioration.


* Doc Cochran girdles up Al Swearengen, is concerned about Al's bladder
* EB Farnum reports on Seth Bullock's visit to Alma Garret, misreads the mood, Al is through with the Seth-and-Alma-sitting-in-a-tree thing


* Seth and Alma are exceedingly awkwardly formal to one another, Alma hold out hope for more of Seth's companionship, Seth struggles taking the high road
* Alma seeks advice from Miss Isringhausen, has become very attached to Sofia
* Alma confesses to her past opioid addiction, passes Seth's pocketwatch to Isringhausen to return to Seth


* Joannie Stubbs, Maddie, and their coterie inspect their new digs - the former Black Hills Cooperage - see a lot of potential
* They start cleaning the place up, EB skulks outside

* Cy Tolliver monologues at his minions (including Leon and Con Stapleton), is both bitter and optimistic


* Doc performs an autopsy, Calamity Jane arrives in town drunk hanging from her horse
* Doc lends her a hand, Jane thinks that she's dying, fishes for sympathy
* Doc's a good man, Jane is Jane
* Doc: "Jane, to me the female breast has long ago lost all mystery or allure. Open your goddamned blouse."
* Charlie is willing to put up Jane, Jane is secretly grateful in her gruff but transparent way


* Al and Tom Nuttall discusses Al and Seth's position
* Silas is upset at (one of his subordinates/friend, Hawkeye?), Dan (Dority) is even more upset and proceeds to whale on him
* Al forbids Silas from intervening, Slippery Dan has a laugh, Silas takes out his frustrations on him
* Nuttall: "He just twelve-pointed Slippery Dan."
* Al ends things
* Silas brings a gift to Wu's pigs, Wu: "Five dollar."
* Dan is very upset, Al talks him down, asks Dan to send up Dolly
* Dolly does something with her thumb and Al's rear to little intended effect
* Afterwards, Dolly: "Shall I suck your dick?", Al: "Please."


* Jane catches up with Charlie and Seth, regals them with a tale of mistaken gender identity
* Seth wants to continue on to the Gem, Charlie doesn't think that's wise, Jane offers to come with
* Trixie has a smoke watching Seth, Charlie, and Jane heading off to the Gem - really fucking does not think its a good fucking idea at fucking all
* Seth call out to Al to come out in 5 minutes
* Al dialogues at Dolly as she vigorously tries to finish him off
* Seth: "Three minutes!", Al: "Shut the fuck up!"
* Seth: "One minute!", Charlie: "What the fuck happened to two?", Al: "Talk about one person fucking up another person's entire fucking day!"
* Al buttons up, tells Seth to wait, tells Dolly to wait
* All parties are nervous, Trixie loads up, hands Sol a pistol
* Al finishes dressing, refuses arms from Dan, retrieves Seth's gear
* Al is polite, politic, tries again to ensure Seth's service to the camp, returns Seth's gear
* Seth: "Did you find my hat?"
* Al: exasperated "Dolly! Could you look for the sheriff's hat? ... Wish her aim was as good with her thumb."

* Merrick plays reporter, is rebuffed by Seth, Al gives him the runaround
* Seth, with badge and gun again, gently confronts his new family
* Martha alludes that she is willing to have intercourse with Seth
posted by porpoise
« Older Jessica Jones: AKA The Octopus...   |  Jessica Jones: AKA Facetime... Newer » 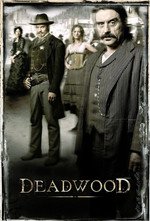