Plastic surgeon Larry Roberts performs a series of minor alterations on a group of models who are seeking perfection. The operations are a resounding success. But when someone starts killing his beautiful patients, Dr. Roberts becomes suspicious and starts investigating. What he uncovers are the mysterious - and perhaps murderous - activities of a high-tech computer company called Digital Matrix.

Albert Finney, sporting a neutral American accent, heads the cast as Dr Larry Roberts, a leading Los Angeles plastic surgeon being set up as the fall guy in a string of murders of beautiful models who happen to be his patients. Bypassing the police detective (Dorian Harewood) on the case, Roberts teams with model Cindy (Susan Dey) to track down the real killers, with Cindy infiltrating a suspicious research institute run by Jennifer Long (Leigh Taylor-Young) as part of the conglomerate Reston Industries headed by John Reston (James Coburn).

NYTimes: Michael Crichton's ''Looker"... is a slick-looking, paranoid nightmare about our society's increasing dependency on computers and the awful things that might happen to us if the people who make computers join forces with the people who decide what we'll see on television. It is Mr. Crichton's promising premise that this evil if cordial entente will soon be ruling the world by sending out subliminal messages hidden in television commercials for everything from hair-sprays to political candidates.

The premise, though, is the only satisfying thing about ''Looker,'' which Mr. Crichton has directed from his own original, stupifyingly nonsensical screenplay.

The plot is pretty silly but Mr. Crichton's handling of it is even sillier, though it is bold. When his characters get themselves into a tight spot and, against your better judgment, you wonder how they'll get out, the director just cuts to another scene in which the tightspot has been forgotten. His chases have no climaxes. They simply end. Mr. Crichton has fun sending up television commercials in one extended sequence, but his direction of the rest of the film is so sloppy one suspects that if he himself were a plastic surgeon, two ears might wind up on one side of the same head.

Looker is the rare cheesy 1980s scifi movie that got the future right
posted by MoonOrb (8 comments total) 1 user marked this as a favorite
The thing that bugged me later in life when I learned a bit more about computers is that while you've got these perfect computer-generated people being inserted into commercials, you still have real physical props and sets moving around.

Kitchen cabinets (for instance) would be a thousand times easier to generate than realistic people, so why go to the trouble of building the entire set?
posted by Mr. Bad Example at 2:06 AM on April 24, 2018 [1 favorite]

For whatever reason, this movie stuck in my brain (and I LOVED the physical sets that seemed like Disney World). Losing time from the flashing seemed terrifying at the time, but when I watched it again decades later it seemed really dopey.

I love Looker, though it is bad. And slow. Finney is such a weird, gnarly casting choice, it's hilarious, it's absolutely hilarious how unsuited he is. But it works because his character is sleazy and witless, really just complicit in the world of commoditized feminine beauty this movie probably doesn't mean to really say is evil. Even the title is so bad it becomes good. Overall, the movie's bad, though often entertainingly bad, but even with some good parts: zapping through a rear view mirror is a good trick, and time skips are something, and the commercial holodeck showdown is funny; Spurt. I even love the overused corny synth thriller music.

And while Michael Crichton can eat all the bags of shit, I dunno, there's something about the anti-corporate 15-minutes-into-the-future thriller I enjoy. I also liked Coma, though not the way I like this good bad movie.
posted by fleacircus at 6:58 AM on April 24, 2018

Oh, man. I saw this on TV in probably 1983, when I would have been about ten. I remember not quite understanding why I was as interested in it as I was. It seems pretty obvious now.
posted by kittens for breakfast at 5:06 PM on April 24, 2018

The joke in the 80s was that HBO stood for "Hey, Beastmaster's On!" but Looker was probably a close second. I'm sure that had nothing to do with a nekked Susan Day. I don't think I've seen it in forever but I loved it back then. I thought the idea of something that put someone's brain on pause was a pretty fascinating mechanic.

One of the things I remember like I've just seen the movie was his method for hiding the keycard in plain sight. No wonder I'd later find steganography so interesting.
posted by phearlez at 7:43 PM on April 26, 2018 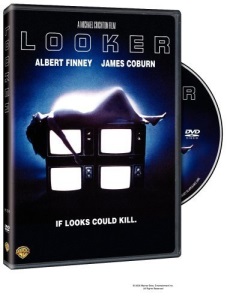