When a woman learns of an immortality treatment, she sees it as a way to outdo her long-time rival.


[US trailer] [IMDB] [Wikipedia] [Rotten Tomatoes] [TV Tropes] [BBFC] [Music & clip playlist] ...Death Becomes Her is clever, different and dementedly entertaining, while commenting on our unhealthy obsession with youth and beauty. This type of darkness lights up the screen. The Hollywood Reporter

At the film’s peak, Zemeckis, the cast, and the special-effects team achieve a deluxe, macabre slapstick. In passing, the movie comments on the Beverly Hills cult of youth and beauty, but the script, by Martin Donovan and David Koepp, which pivots on an immortality potion, is basically an excuse for Streep and Hawn to wallop each other with the aid of flesh-bending special effects. The New Yorker The trouble with Death Becomes Her isn’t that its comic vision is too dark but that it has no shadings, no acerbic glee. Zemeckis gives nastiness such a hard sell he forgets to take any delight in it. Entertainment Weekly

The contempt for women in this movie actually goes well beyond physical abuse, but it's the violence that gets the biggest laughs, and certainly the movie wouldn't have much impact without it. The Chicago Reader
posted by Ten Cold Hot Dogs (13 comments total) 8 users marked this as a favorite
Remember when Bruce Willis acted? And even had something approaching range?
posted by doctornecessiter at 9:30 AM on September 12, 2018 [4 favorites]

I knew this movie would be amazing as soon as the opening musical number went disco and the dancers started whooping.
posted by infinitewindow at 11:46 AM on September 12, 2018 [4 favorites]

I've never seen this (although it sounds like I should), but my local video store had a big poster of both this movie and Dead Alive and they were the two scariest things in my 7 year old life.
posted by theodolite at 3:55 PM on September 13, 2018 [2 favorites]

The AskMe 'face in the bottle' mystery

I checked too, and can also confirm the face. Vindication for the Asker, about nine years too late.
posted by roger ackroyd at 8:31 PM on September 13, 2018 [3 favorites]

One of my favourite movies with such a bleak end; they continue to live even as fragments oh my gawd.
posted by h00py at 5:07 AM on September 14, 2018 [2 favorites]

I first saw this movie on laserdisc when visiting relatives in HK when I was a teen.

Stumbled upon it again, maybe last holidays - and it was as excellent as I remembered.

The CGI hole-in-body was mindblowing for the era. Hawn and Streep has such great chemistry as nemeses.
posted by porpoise at 10:12 AM on September 14, 2018 [1 favorite]

The AskMe 'face in the bottle' mystery

The etiquette on AskMe thread-sitting has changed considerably since 2009.

I remember loving this movie a lot when I saw it in theaters. Hawn and Streep were gold, Willis was Willis-ing along just fine, the SFX were amazing. And then I kinda... forgot about it. Haven't given this movie a second thought in decades. Might need to rewatch it now.
posted by hanov3r at 10:37 AM on September 14, 2018 [1 favorite]

Someone said you can always tell by the hair if Streep is in comic or dramatic mode, bangs are serious, swooshes are comic. Streep was in serious contention around this time for the Margo Channing role of an all about eve remake and this movie is about as close as we got.

Yeah I’ve seen this like ten times, the screenwriters described it as “Noel Coward’s Night Of The Living Dead.”
posted by The Whelk at 1:46 PM on September 14, 2018 [3 favorites]

The etiquette on not being a huge a-hole to the poster has changed as well.
posted by stoneandstar at 8:48 AM on September 17, 2018 [2 favorites] 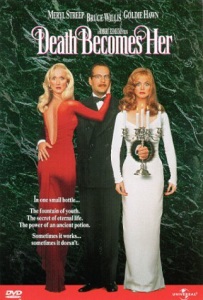