Kai tells Bonnie and Damon to prepare for the eclipse that can bring them back home. Bonnie soon discovers that Kai knew nothing about the spell and kills him. He never was dead, but he needed a Bennett to help him go back home, so he tries to kill Bonnie and Damon once they were close to coming back home. While Bonnie is bleeding on the ground, Damon fights Kai, but Bonnie uses her magic to make sure Damon goes back home. Meanwhile, Elena and Laim go to Whitmore College Corn Maze. While there, Tyler accidentally runs over the entire corn maze with a truck due to someone running out in the middle of the street, so Elena and Tyler have to make sure no one dies because then Tyler would unlock his werewolf curse. Stefan tells Caroline to teach Ivy the vampire ropes. Ivy breaks Caroline's neck and Ivy decides to go feed, but didn't know how to compel. Ivy gets captured at the end by Tripp. Stefan and Damon reunite.
posted by Kitteh (6 comments total)
Especially now that Damon's gone (though I've been liking him FOR ONCE these past couple episodes), I really want this to just be the Kai and Bonnie show for a while. I enjoyed the Damon and Bonnie show pretty well, and I'm ready for this new iteration. Plus, I find Kai interesting. And find it weird that the witches that cursed him to 1994 didn't decide to put hallucinations of his family there with him. Aren't they usually big on the slow, steady psychological torture?

Unfortunately, I think we're just not going to be seeing 1994 for a bit as Bonnie goes on her usual "missing for several episodes obviously for financial and not story-related reasons" hiatus. (?)

Otherwise, I like Stefan and his quietly asshole behavior right now, but I always like Stefan. Felt terrible for that girl who got an emergency trach in a cornfield. If only Alana had just given her some blood ffs! I hope she does it when Liam is out of sight, that pen-trach-tube has got to be incredibly painful and will leave a scar. I don't care at all about Alaric, but I never care about Alaric.

I've had to be home sick all week and have been watching old TVD episodes on Netflix and WOW vampire!Elana is actually much, much different than human!Elana. I'm actually kind of shocked, I see now why nobody wanted her to become a vampire, even though I didn't back in S1 or S2 or S3.

It can be pretty hard to tell the difference between a human being and a vampire on this show, aside from the vampires' superhuman abilities and all. I've been trying to figure out what's so different about human!Elana and vampire!Elana. I guess human!Elena was more caring? They always say that vampires have more intense feelings and that everything is dialed up to 11 with them, but I actually think that vampire!Elena is much more cold-hearted and takes things much less seriously. It makes me think back to how Stefan and Katherine would always say how "sweet" Damon was as a human. I didn't know how to take that at the time because he was *a Confederate soldier* and *heir to a plantation* (!!!!) neither of which are "sweet" things. But I dunno, I guess I can sort of understand what they were talking about now?

I was also thinking about other reasons it would be good to stay a human as opposed to become a vampire. I guess as a human you get to have babies (maybe), you can rest in peace instead of going to the Other Side after death, and you have that human je ne sais quoi that I guess Elana (and Damon?) doesn't have anymore? The "being trapped in the Other Side for eternity" sounds like it's *actually* terrible and a for real problem with becoming a vampire, imo. But maybe the je ne sais quoi problem is a biggie, too? But what *is* that je ne sais quoi, anyway? Meh, just wondering.
posted by rue72 at 2:04 AM on November 1, 2014 [2 favorites]

The neck snap Vampire Off Button is getting kind of boring now. It's overused to the point where a complete newbie vamp just instinctively knows how to do it? WELCOME TO UNDEATH - YOUR FOES ARE VERVAIN, SUNLIGHT, AND A BIT OF TORQUE.
posted by robocop is bleeding at 7:38 AM on November 1, 2014 [3 favorites]

As much as I like Bonnie, maybe it's time for the show to let her go for good as it is obvious they really cannot figure out what to do with her.

But sorry, I LOVE Alaric and look forward to him finding out his bestie/drinking buddy is back. Oh, and man is Damon going to go apeshit when he finds out Elena wiped her memories of him. And probably not the fun kind of apeshit either.

I hate Kai and I hope I never have to see his smarmy stupid pushing-the-plot-along face ever again. I will probably not be that lucky.
posted by Kitteh at 9:13 AM on November 1, 2014 [1 favorite]

But sorry, I LOVE Alaric and look forward to him finding out his bestie/drinking buddy is back.

Basically everyone seems to like Alaric, so I always try to give him a chance, but literally every episode he does or says something that just makes me dislike him/his SL again. In this episode, it was the thing of telling Jo he was a "borderline alcoholic" and then her being like, "you're definitely an alcoholic" and then going in for a kiss. WUT. I mean, it's not a joke, he actually does seem to have a drinking problem. What kind of lunatic would want to be around that? This doctor is bizarre. First it was the jealousy/anger over Alaric looking at Gaping Head Wound Patient in the ER while having a conversation with her and now it's the nonchalance over his raging alcoholism -- why doesn't she have at-all normal responses to things?

And yeah, I know the really ~weird~ response is supposed to be that she didn't respond to him compelling her. But that just means she's either supernatural or drinking vervain, which TONS of the characters are, so nbd.
posted by rue72 at 11:41 AM on November 1, 2014

I just realized what I want is an episode of Mystic Falls drama intercut with clips of Bonnie kicking back in 1994 with pop tarts and a bottle of wine, a stack of magazines and using magic to give herself a perfect pedicure. Give Bonnie a break!
posted by viggorlijah at 1:49 AM on November 3, 2014 [1 favorite]

As much as I love TVD, they have such a weird and shitty track record with characters of color that I would rather Bonnie exit the show permanently than keep making her the magical black witch only needed when one of her white friends in a jam. She deserves stronger storylines. Maybe if she's still trapped back in 1994 with Murder WitchBoy that can lead to something interesting?
posted by Kitteh at 6:24 AM on November 3, 2014 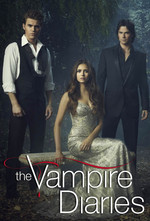