Valley of the Boom is an American docudrama television miniseries, created, directed, and executive produced by Matthew Carnahan, that premiered on January 13, 2019, on National Geographic. The series centers on the 1990s tech boom and bust in Silicon Valley and it stars Bradley Whitford, Steve Zahn, Lamorne Morris, John Karna, Dakota Shapiro, Oliver Cooper, and John Murphy.


TV reviewer James Poniewozik tweeted: "(I watched just a couple episodes of Valley of the Boom, not enough to review, but it was both attention-getting and exhausting.)"

Richard Trenholm at CNet: "National Geographic's drama/documentary about Silicon Valley in the 1990s might overload your bandwidth"

John Timmer at Ars Technica: "A mix of documentary and historical reenactment with an emphasis on great acting."

Let's do the full season with spoilers because a. I mean, there are no spoilers, b. there are probably like three of us who are watching it.

This almost made me post about the early Internet on Facebook. I did not, as the irony was too deep even for me. Besides Unsolved Mysteries or 48 Hours, are there any other shows that are this combo of re-enactment and documentary?
posted by fiercekitten at 5:06 PM on January 17, 2019

Have only seen the first two, but I kept waiting for Admiral Eyebrows to show up.
posted by sageleaf at 12:53 PM on January 18, 2019

are there any other shows that are this combo of re-enactment and documentary?

I haven't seen it, but I've been hearing that it's ripping off the major device in The Big Short.
posted by General Malaise at 1:32 PM on January 18, 2019

There are a lot of documentaries about history that follow this format. I got tricked into watching one about Rome on Netflix or Amazon for a few minutes. It's ok when it's clear that it's a "documentary with dramatizations to illustrate" format, but this is more like "prestige drama with talking heads to fill in the gaps of what we wrote and/or taped". Did they not have good enough writers? Producers? Enough money to pay the actors for what they'd ask for a real show?

And like there were a lot of awkward things I love Bradley Whitford but why does his character look he the same age in the 90s as the real guys is now. And the guy playing the genius character going out of character to say "Hi I'm an actor, I'm also playing him in these interview segments", was a novel solution to that problem, that I wish they just didn't have because that took me out of the rest of the show. Like hey that guy's an actor, he told me so with his own face.
posted by bleep at 6:37 PM on January 18, 2019 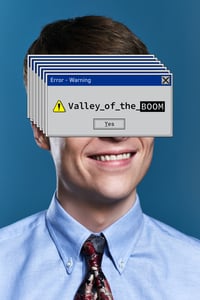