It's been five years since everything was awesome, and the citizens of Bricksburg are facing a huge new threat: Lego Duplo invaders from the Systar system, who have turned their city into Apocalypseburg by wrecking everything faster than they can rebuild.
posted by EndsOfInvention (14 comments total) 2 users marked this as a favorite
Wikipedia (warning: contains references to "LEGOs").

I highly enjoyed this. I didn't know where they were going to go with the plot after the ingenious meta-story of the first film, but the sibling thing worked really well (speaking as a parent who has had their second child since the first film came out). I took my older kid (6) to see it and later that day I asked him if the kids in the film reminded him of him and his little brother (2). He laughed and said "yes" and not 5 seconds later the aforementioned brother came over and destroyed something the older kid was building. If I thought the sequel couldn't hit me in the Parent Feelings like the first one did, I was wrong, it did. Bad.

Other favourite bits:
- I loved the meta-joke of Rex being a combination of Chris Pratt's Guardians Of The Galaxy and Jurassic Park characters.
- The raptors yelling "I love tennis!!" cracked me up.
- The vision of Benny's Classic Space planet gave me the biggest grin.
- I guessed that Rex was future-Emmet after the older brother said something like "leave me alone! I'm in the middle of a time-travel storyline!" earlier on.
- All the Mad Max-esque stuff at the start of the film looked so good.
- I keep threatening my kid with The Bin of Stor-Arj which amuses me a lot more than him apparently.
- All the different time machines being cannibalised for Rex's time machine, and the subsequent Back To The Future reference to him fading out as he ceases to exist.

Finally, damn the sound track was good:
Not Evil - hilarious, even on relistening later.
Catchy Song - on par with Everything Is Awsome imo.
Super Cool - I wanted to stay for this whole song over the credits but my kid wouldn't let me.
Everything's Not Awesome - no YOU teared up when WildStyle started her verse.
posted by EndsOfInvention at 7:18 AM on February 12, 2019 [8 favorites]

This is when you truly are a parent -- you make a corny joke that you really enjoy, which your child begrudgingly accepts :)
posted by filthy light thief at 9:01 AM on February 12, 2019 [4 favorites]

It was good, worth seeing. Not a truly great film, like the first one was, but definitely good, and I'm glad I went.

Cons: The story reveals were much more easily predicted in this one, which made some bits which should have been "oh, wow!" moments a little anticlimactic. Pros: The fourth-wall breaking moments were GREAT.

> "no YOU teared up when WildStyle started her verse."

I took my 3yo to see this over the weekend. It was her first time in a theater. She absolutely loved the first one and was jazzed out of her gourd to go see this. When we left she said "THAT MOOBIE WAS AMAZING!" with unbridled three-year old enthusiasm, but the first ten or fifteen minutes she wasn't quite sure if it would be her thing

I thought it was pretty good. I feel like the second act dragged a bit while waiting for the meta-reveal to come out. Once that was set into motion I thought it was really great. Hit some different notes than the first movie and was quite touching.

I think the art direction was a step above the first film. Some really astonishing designs that accomplished their intended effects of making me want to immediately go out and buy their sets.
posted by Tevin at 11:21 AM on February 12, 2019 [3 favorites]

Saw it with my daughter this past weekend and liked it a lot. I think it definitely suffered from some pacing issues and could have stood to be tightened up a bit and brought down to a lean 90 minutes.

Huh. I just found it incredibly contrived, with every joke forced in there. It's like they took everything that made the first one great, and copied it, losing all the charm in the process.

Perfect example: in the first movie there's a quick cutaway of them flying away at one point - only instead of the animated Lego they used an actual Lego model on a string pulled across the screen. It was stupid, it was hilarious, it was completely unexpected. So in the sequel they did the same thing - cut away from the animation with an actual plastic model on a string. Twice.

Even the original jokes were duplicated - the mother steps on a piece of Lego, twice. Rex's flash titles were used - twice. As a commentary on the repetitive nature of sequels that's interesting, but it's grating when that's pretty much the only joke you have.

I mean, it was good, but it was amusing rather than funny. It never surprised me. Everything was either a callback to the last movie or to some other bit of pop culture. I wanted a better balance between familiarity and novelty. I got the former but none of the latter.
posted by GhostintheMachine at 7:46 PM on February 12, 2019 [4 favorites]

I predicted the sequel wouldn't be as brilliant, and it wasn't. It was entertaining-ish.

None of the returning characters aside from Emmet, Wyldstyle and Batman had the chance to be their charmingly weird selves for more than about five seconds (and Batman pretty much wasn't himself). Aside from Rex and the Queen, the new side characters didn't have any personality at all.

The story and the meta-story didn't really align as neatly as in the first movie.

I thought "Super Cool" and "Not Evil" were good songs, but I went home with "Everything Is Awesome" stuck in my head, not "Catchy Song."

I'm with EndsOfInvention, I loved this movie. I loved how they called out some of the problematic gender stuff from the first one. (I don't know that I love the trend of movie-creators feeling like they NEED to respond to People On The Internet, but for these movies it works because the humor is so meta.) I loved the BTTF references, the songs (Taco from The League did Catchy Song and I have a special place in my heart for him), and the sibling relationship/parenting feels were real. I too have had a second kid since the first one came out so the exploration of that dynamic really resonated with me.
posted by emkelley at 9:42 AM on February 15, 2019 [2 favorites]

My kid went to see it with grandparents so I haven’t seen the movie, but I have been enjoying the soundtrack. Gotham City Guys cracks me up!
posted by Swisstine at 4:53 PM on February 19, 2019 [2 favorites]

We saw this on Sunday with our two boys, and I was in the mildly amused camp (and I actually fell asleep early on, in part thanks to comfy reclining movie theater seats), but my wife and our boys were BIG fans. And when Unikitty thought that the universal language was math, with glee in her cartoon eyes, my wife was really won over :)

But it also has some great parenting references that we've my wife and I have used the threat of OURMOMAGEDDON (and OURDADAGEDDON, but it doesn't have the same flow) and to send their toys to The Bin of Stor-Arj due to boy battles over toys, which has actually been an effective threat, and amusing to all -- so, net win, and I'll promote my evaluation of the movie to "pretty good."
posted by filthy light thief at 7:04 AM on February 20, 2019 [4 favorites]

As a non-parent, I'm just glad this movie was used as an excuse for another Lego video game.
posted by Marticus at 5:51 PM on March 24, 2019

annathea: I think I’m starting to get Radiohead.

Bro, you should try Elliott Smith.

(That line gets me every time.)

Four months later, this soundtrack is still getting heavy play at home, though not on endless repeat. And the movie really has really grown on me, thanks in part to the joy our kids have in watching it, and endlessly re-enacting and recreating parts of the movie, with their own twists.
posted by filthy light thief at 8:00 AM on June 14, 2019 [1 favorite] 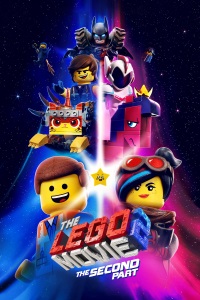