The next big human pandemic―the next disease cataclysm, perhaps on the scale of AIDS or the 1918 influenza―is likely to be caused by a new virus coming to humans from wildlife. Experts call such an event “spillover” and they warn us to brace ourselves. David Quammen has tracked this subject from the jungles of Central Africa, the rooftops of Bangladesh, and the caves of southern China to the laboratories where researchers work in space suits to study lethal viruses. He illuminates the dynamics of Ebola, SARS, bird flu, Lyme disease, and other emerging threats and tells the story of AIDS and its origins as it has never before been told. Spillover reads like a mystery tale, full of mayhem and clues and questions. When the Next Big One arrives, what will it look like? From which innocent host animal will it emerge? Will we be ready?
posted by Homo neanderthalensis (4 comments total) 5 users marked this as a favorite
Similar to the rabies book, a non-fiction that reads a bit like a horror book. I was reminded of this book because of the recent FPP post on the rehabilitation of the reputation of "patient zero", Gaëtan Dugas. This book has a lot of information on a lot of different zoonotic infections and how they jumped to humans and the history of said infections, HIV/AIDS among them. A frightening look at the potential future, and the recent past. Maybe read with the lights on.
posted by Homo neanderthalensis at 7:48 PM on April 27, 2019 [2 favorites]

Terrific read by a seasoned author. The HIV section is amazing-the best layperson's explanation I've found. Quammen expanded it to a full-length title, The Chimp and the River (amazon).

Another expanded gem is the Ebola section, Ebola (amazon) - not a hyperbolic Hot Zone-ish scare-story.
posted by j_curiouser at 1:31 PM on April 28, 2019 [1 favorite]

I just finished this and really enjoyed it. I didn't think it hit on the horror as much as some other books in this genre, and I learned a lot about how disease spreads, and doesn't, and so on. Also, Quammen is a lovely writer, much more than merely competent, as many popular non-fiction books are. A friend says I must follow up by reading everything else he's written, and I can imagine doing that.
posted by Orlop at 1:59 PM on May 5, 2019 [2 favorites]

A diagram of the non-human primate precursors to HIV-1, its spillover to humans, and the places and dates where it showed up later would have been reallllly helpful, although a careful reader can construct their own. Still a fascinating read ... thanks for posting, especially since I'm reading the McKay book about Patient Zero right now.
posted by Sheydem-tants at 2:31 PM on May 5, 2019 [1 favorite] 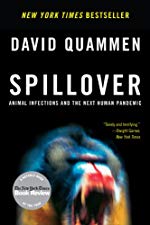