The Middle Ages re-created through the cast of pilgrims in The Canterbury Tales. Among the surviving records of fourteenth-century England, Geoffrey Chaucer’s poetry is the most vivid. Chaucer wrote about everyday people outside the walls of the English court—men and women who spent days at the pedal of a loom, or maintaining the ledgers of an estate, or on the high seas. In Chaucer’s People, Liza Picard transforms The Canterbury Tales into a masterful guide for a gloriously detailed tour of medieval England, from the mills and farms of a manor house to the lending houses and Inns of Court in London.


In Chaucer’s People we meet again the motley crew of pilgrims on the road to Canterbury. Drawing on a range of historical records such as the Magna Carta, The Book of Margery Kempe, and Cookery in English, Picard puts Chaucer’s characters into historical context and mines them for insights into what people ate, wore, read, and thought in the Middle Ages. What can the Miller, “big…of brawn and eke of bones” tell us about farming in fourteenth-century England? What do we learn of medieval diets and cooking methods from the Cook? With boundless curiosity and wit, Picard re-creates the religious, political, and financial institutions and customs that gave order to these lives.
posted by Homo neanderthalensis (3 comments total) 7 users marked this as a favorite
Liza Picard is an excellent history writer, who’s books on the London of various time periods are quite well liked and well researched. This book however isn’t about London as much as it’s about medieval life in general, using the framing device of a deep dive into Chaucer’s pilgrims from The Canterbury Tales. I read the tales years ago, and it was mostly a chore, especially since I don’t come from a Christian background and therefore a great deal of the context was lost to me. But this book essentially fills in the context needed to understand the tales. It’s a fascinating look at both character archetypes and history through the eyes of one of the best history writers.
posted by Homo neanderthalensis at 9:30 AM on July 1, 2019 [2 favorites]

Thanks for drawing my attention to this book. This is relevant to my interests.
posted by litlnemo at 10:53 PM on July 5, 2019 [1 favorite] 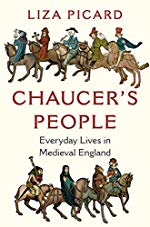