Titans together! Hank and Dawn enlist Jason's help to find Dick. Joined by Donna and Kory, they confront Rachel's dad while Gar shifts to a new form.
posted by sardonyx (7 comments total)
Okay, I don't know if anybody has bothered to return to watching this show. I'm in for now at least. The timing of the season premier is good because it's getting the jump on the fall season and everything else is still reruns.

I read somewhere that this was supposed to be the end of the first season and not the start of the second, so I'm hoping that all (or most) of the problems the show is still demonstrating have been resolved, because man there are so, so many on display in this episode.

I don't think this episodes warrants any deep analysis or critique or commentary, so I'm just going to post some random thoughts.

Boy, I hope they laid down some plywood on the floor before they let that motorcycle into the building standing in for Wayne manor. (I don't think that was a set.) If not, I'd hate to be in charge of refinishing the floor.

Trigon's visions of the Titans' dark inner selves were really bad and off-character. There is no real valid reason for Jason's darkest fantasy to involve shooting Dick with Joe Chill's gun. Neither is it valid for Dawn to be turned to the dark side just by taking Hank's drugs (or for Hank to desire getting Dawn hooked in the first place.) I don't think it would really bother Amazon-trained Donna to kill the arsonist. (Young Donna was a lot older than she was typically depicted.)

Rachel's victory over Trigon seemed way too easy. Speaking of Trigon, the F/X were terrible and cheap and the Castle cop actor did a really awful job with the character although I wonder if that had more to do with the direction, given how Bruce was portrayed (which I'll get to later).

I don't get the dramatic and ominous shot of Slade's washstand. That was a real head-scratcher of a directing/editing choice. Also, I guess the guy complaining about Slade's mail is supposed to be Wintergreen, right?

Why in the world would the news reporter refer to a team of masked heroes when the only person in costume was Jason? The rest of them were all hanging around in street clothes and didn't seem too concerned about showing their faces to the camera, especially Hank.

I mentioned above I'd get to Bruce, but to be honest, I still have no idea what to make of any of the scenes at Wayne manor. Maybe I'm just not remembering things correctly due the time that has passed between the end of the first season and the start of the second, but I don't think that's the problem. So are we supposed to take the view that none of that stuff in Gotham actually happened between Bruce and Dick and the GCPD? That it was all just Dick's dark fantasy triggered by Trigon? If so, that's a pretty lousy way to treat the viewers. Even if it's not, things needed to be made clearer because there certainly didn't seem to be any consequences from the situation. Bruce was still around and not under arrest. The mansion didn't seem to suffer any damage. Jason still seems to have the ability to tap into the computer and track Dick (or so he tells Hank and Dawn). So we're to take it that there was no fallout from that battle royal and the unmasking of Batman's and Robin's identities? I'm not buying that if that's what they're selling.

As for the actor playing Bruce, I'm not especially fond of his portrayal or acting choices (or as noted above, maybe it's the directing choices). At first the performance seemed really affected and off somehow, but I couldn't figure out how to describe it. Then it came to me: this is somebody doing an Adam West version of Bruce Wayne but played seriously, without the winks and nods to the audience, all so it can fit into a gritty version of the DC universe where Robins flip the bird and swear at each other.

Now that the first arc is officially over, I'm hoping the second season can start to gel a bit better with characterizations that make sense.
posted by sardonyx at 9:01 PM on September 6, 2019

The show just feels so tonally odd.  Having seen what they're capable of in the universe-adjacent Doom Patrol, it seems like such a sorely missed opportunity to have so utterly failed to infuse Titans with the same sense of fun.

Oh well, maybe season 2 will shape up better now that with this episode they've aired what was obviously meant to be the season one finale.  I'll keep my fingers crossed, but man, they need to just lighten up a little.
posted by los pantalones del muerte at 11:11 PM on September 6, 2019

I'd understood all the Gotham stuff about Batman going off the rails as Trigon dreams, as they all happened after the brainwashing chair.

Some of the lingering shots were weird. Like did they need to pad out time or something? It's a washbasin, not a plot point. And I really felt that if we were going to get that slooooooow pan out to show the harbor we deserved an architecturally impossible T-shaped building for our time.

At least we know Beast Boy has more than one animal shape in his repertoire. I'd actually been starting to think the show was going to leave him with just the tiger form.
posted by Karmakaze at 7:30 PM on September 7, 2019 [1 favorite]

Since there seem to be at least a few people watching this, I'll put a question out to the group: is the preference that we continue to do single-episode posts or do what we did with season one and have a full-season thread?
posted by sardonyx at 6:49 PM on September 8, 2019

Hmm, I'm not going to be commenting much, so a full-season thread would be enough for me.
posted by Pendragon at 3:09 AM on September 9, 2019

Glad you mentioned that because that was the first thing I thinking as it was wrapping up. And yeah, all that bad shit was literally in everyone's heads. Which made it especially hard to care while watching it.

As for the actor playing Bruce, I'm not especially fond of his portrayal or acting choices (or as noted above, maybe it's the directing choices). At first the performance seemed really affected and off somehow, but I couldn't figure out how to describe it.

When I first started watching the show I figured we wouldn't get to see Batman or Bruce. He'd be notable in his absence. He would be shown in the mark he left on Dick's life. Then we saw his back, then his silhouette, which wasn't great in my mind, but okay sure you're still not seeing his face so he's still kind of a shadow.

Then we jump right to hanging out with Bruce for a chat in broad daylight in Wayne Manor, which I was very jarred by and honestly didn't know what to make of. Maybe it's catharsis for Dick, a way to show him leaving the darkness behind. Then again, this Bruce feels almost like a paper cutout. He doesn't seem to be doing or saying anything really. Maybe he's holding back because it's not his story, maybe in some ways he's still a silhouette even though we can see his face. I don't really know.
posted by ODiV at 7:17 PM on March 15, 2020 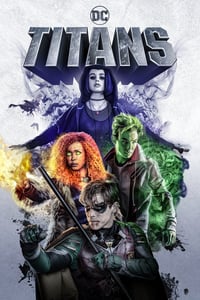