The great city of Alt Coulumb is in crisis. The moon goddess Seril, long thought dead, is back--and the people of Alt Coulumb aren't happy. Protests rock the city, and Kos Everburning's creditors attempt a hostile takeover of the fire god's church. Tara Abernathy, the god's in-house Craftswoman, must defend the church against the world's fiercest necromantic firm--and against her old classmate, a rising star in the Craftwork world.


Tara Abernathy is back, in a direct sequel to Three Parts Dead. More familiar faces return, and some new faces are introduced. There's also a trip back to Dresediel Lex, in case you missed Caleb!

This is the last book published in "Season One" of the Craft Sequence, evidently Gladstone won't jump around in "Season Two." (I'll post Full Fathom Five—the third/fifth book—in a few days, I'm sure.)
posted by fifteen schnitzengruben is my limit (2 comments total) 1 user marked this as a favorite
I thought this one was pretty good, mostly because I was so glad to see Tara and the gang again. The plot was a bit more straightforward than Gladstone usually does -- battle lines drawn, battle plays out -- which was less riveting to me than his complex wheels-within-wheels stuff, but the characters were enough to happily see me through it ...

... with the exception of the trip to Dresediel Lex, a pointless plot tumor introduced solely so that the book could revisit a character I hate. Put me on team Caleb Ruins Everything, and I will continue to try to pretend that relatively small part of the book never happened.
posted by kyrademon at 2:09 AM on March 10, 2020 [2 favorites]

Some things about this pleasantly surprised me! The news was also about choir performance. The vampires-at-the-bottom-of-the-sea sequence. What it's like to visit a working Craftswoman's office and teleconference with her. Cat and Raz going on adventures and stuff!

Plus, Tara is just way cool. It was nice to visit her again.
posted by fifteen schnitzengruben is my limit at 8:56 AM on March 10, 2020 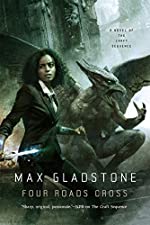