As part of a fertility research project, a male scientist agrees to carry a pregnancy in his own body.


A research scientist becomes the world's first pregnant man in order to test a drug he and a colleague have designed for expectant women. To carry out the trial, he has an embryo implant, believing that he will only carry the baby for three months - hardly expecting to face the prospect of giving birth.

James Berardinelli: Even suspending all semblance of disbelief doesn't make this film work. It is so poorly-constructed that a viewer has to go into a catatonic state to appreciate what's happening on screen. You don't expect high art from a Reitman production, especially when Arnold is the big draw, but this kind of unrepentant idiocy is unforgivable. Twins and Kindergarten Cop weren't great movies, but they had a lot more going for them.

The story revolves around the fertility team of Alexander Hesse (Schwarzenegger) and his diminutive partner, Larry Arbogast (Danny DeVito). These two don't really like each other, but each is willing to put up with a lot for the sake of their research -- a new wonder drug designed to reduce, if not eliminate, miscarriages. However, when the drug doesn't obtain FDA approval, Hesse and Arbogast are displaced from their laboratory so that the space can be given to Dr. Diana Reddin (Emma Thompson), whose work involves frozen eggs. Undaunted, the two scientists decide to continue their experiments, this time using a human test case. So, after some prompting from his partner, Hesse fertilizes one of Reddin's cryogenically-preserved eggs and implants it in his abdominal cavity. Now, he's pregnant. (Does that make him daddy, mommy, or both?)

I won't deny that the premise has comic potential, albeit of an unsophisticated sort. The problem is that the trite script fails to capitalize on opportunities, relying instead on worn-out cliches and jokes that are, for the most part, unfunny (there are a few notable exceptions -- I admit to laughing once in a while).

Marjorie Baumgarten: Junior seems as though it were conceived while on autopilot. Formula: Repeat the wonderful “opposites attract” pairing of DeVito and Schwarzenegger, boost the “kiddie madness” of Kindergarten Cop to an even more ludicrous level by having the muscleman play the world's first pregnant man, further the preposterous mismatches by pairing Schwarzenegger with an unlikely love interest -- the stereotypically British, classical actress Emma Thompson, cast here as a spacey scientist. . . chwarzenegger is increasingly overwhelmed by stereotypically “female” behavior -- he becomes an emotionally needy partner (a wife to DeVito's husband), craves pickles, and cries over sappy stuff on TV. He suffers morning sickness but no breast engorgement, his sexual desire is heightened but he remains a confirmed male heterosexual. Funny stuff, this estrogen. Weirdest of all (even weirder than Judy Collins' presence in the film), is hearing Schwarzenegger uttering the movie's signature line: “My body; my choice.” It's even weirder than seeing his character dressed in drag -- an obvious bow to the hip movie fashion of the year.

Roger Ebert: This is a dubious procedure, because Arnold must first be implanted with a fertilized human egg - unusual for a woman, unheard of for a man. It's a good thing Arbogast is a persuasive talker; DeVito plays him with a conspiratorial charm, talking about the "beauty of the plan" as if it's something anyone would be lucky to participate in. The two doctors borrow an egg, Arnold donates the sperm, they inject the result into his body, and Arnold starts taking daily doses of their miracle drug.

The experiment is not only a success, but Schwarzenegger actually becomes pregnant. The movie wisely never even attempts to explain how this is possible in a person without a womb; hard science is not the strong point here. The movie's comedy, and some other scenes that are sort of touching, all come out of the man's experience as he begins to feel motherly toward his unborn child.

I know this sounds odd, but Schwarzenegger is perfect for the role. Observe his acting carefully in "Junior," and you'll see skills that many "serious" actors could only envy. He never reaches for an effect. He never grabs for a joke. He never wrings an emotion out of reluctant material. He plays the role absolutely straight, trusting the material to make the points and get the laughs. This is probably the only way this story could have worked, but not every actor would have known that.

Trailer
posted by Carillon (8 comments total)
I feel like this is a movie that works better if you haven't seen it and just let your imagination run wild.
posted by Literaryhero at 3:34 PM on November 9, 2020 [6 favorites]

Having just watched it for the first time I can agree with you. I thought it was gonna be better than expected, and it really wasn't.
posted by Carillon at 5:04 PM on November 9, 2020

Weirdly, in my head I was sure that this was way before kindergarten cop, but no, it came out four years later.
posted by Literaryhero at 6:01 PM on November 9, 2020

I don't think I've seen this since it came out, but I have some recollections about it, some of them are even fond. Of course the premise is ABSURD and unsustainable to any kind of logic. But there are a number of moments where big muscular Austrian-accented Arnold delivers lines like "feel how soft my skin is" and you can't help but laugh. "Oh a party! But I have nothing to wear!" Probably not enough to suggest you spend 90 minutes of your life on it. But in its further defense, it DOES have Emma Thompson, and nothing with Emma Thompson can ever be all bad.
posted by wabbittwax at 7:29 PM on November 9, 2020

I feel like there should be a third panel to the Schwarzenegger - Devito triptych. If Twins is the Virgin, and Junior is the Mother...
Or is it just the two, the Castor and Pollux of cloning based farces?
posted by bartleby at 9:33 PM on November 9, 2020

I wonder if there was some earlier story treatment that featured an implantable artificial womb rather than a miracle drug? Or more likely the genuine Sci-Fi aspect of the story was never really explored, instead focusing entirely on "Am I gregnant?"
posted by Mr.Encyclopedia at 12:08 PM on November 10, 2020

I remember watching this at a sleepover at my best friend's house as a ten-year-old. Her mom rented this for us along with Milk Money on VHS. We slept on the fold-out couch in the living room and made "nachos" by tearing up Velveeta cheese slices into little strips and arranging them artistically onto tortilla chips which we then microwaved for 5 seconds at a time. In the morning we went across the street to my house and had waffles with peanut butter on top.

I never saw this movie, but I remember seeing Emma Thompson do some late night talk-show press for it, and something just felt so off about hearing her do a real rah-rah pitch for something that sounded so stupid, I couldn't shake the thought that something was going on with her, something wrong. ....Then two weeks later was when she and Kenneth Branagh split up.
posted by EmpressCallipygos at 3:48 PM on November 11, 2020 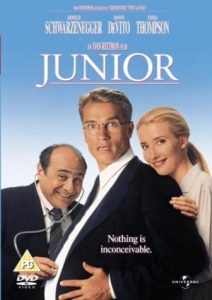