In this collection of early Fafhrd and Gray Mouser stories, the pair return to Lankmahr some years after the ill-fated night of their first meeting. The pair search for treasure and meddle with things better left undisturbed. Mouser enjoys shopping and bathing. Fafhrd fails to adhere to proper concussion protocol. The team demonstrates how real estate scams work when performed by heroes instead of accountants.


This is the second in the series but contains mostly the earliest published stories, mostly from the 1940s. Based on my unscientific memory of which ones I've seen anthologized, the stories Thieves' House, Claws from the Night, and Bazaar of the Bizarre are some of the real classics and not bad ones if you just want to sample.

There are a number of horror themed stories, a couple of which read like Lovecraft homages with the pair grafted on to get them published. (Leiber didn't share all of Lovecraft's issues--Lankhmar is a teeming multi-ethnic city after all--but Seven Black Priests engages in some racist othering.)

Wikipedia is fairly unhelpful on the original publican sources but I believe John Campbell edited most of the originals. Apparently his sensibilities kept the duo more or less chaste through these stories, and the two 1970s framing stories that provide some continuity (The Circle Curse and The Prince of Pain-ease) were a bit of retcon by Leiber to justify this.

Sheelba of the Eyeless Face and Ningauble of the Seven Eyes--the sorcerous patrons and manipulators of the duo--first appear here. The a bit about indeterminate pronouns for Sheelba in The Circle Curse is apparently due to Leiber having forgotten Sheelba's gender when writing one of the stories.

Content note: As with the last volume, this is swords and sorcery from more than 50 years ago and includes violence, torture, abuse and other issues.
posted by mark k (3 comments total) 2 users marked this as a favorite
I forget which story it is where it's implied that they forms Sheelba and Ningauble show Fafhrd and Mouser aren't their actual shapes, and that they're really far more humanoid, if not human. Which makes sense- I'd want to keep a good separation between myself and those two.
posted by happyroach at 10:45 PM on December 7, 2020

I think the Devourers (in Bazaar of the Bizarre) might have been intended mostly to mock advertisers but work pretty damn well as a complaint about capitalists in general. I had a recollection of them but I was laughing at how explicit it was--the extraction and destruction that they leave behind as they grab resources, and also:

Ninguable replied, "The Devourers want only to amass cash and raise little ones like themselves to amass more cash and they want to compete with each other at cash amassing. [ . . . ] And the Devourers want to brood about their great service to the many universes [ . . . ] and complain about how the work of of massing cash tortures their mind and upsets their digestions. "

Entitled 1%ers, wanting everything, preserving nothing, but demanding praise as job creators.

I had fun with most of these. The little character bits that go against type--like the supposed barbarian, the mighty-thewed Fafhrd, being good-hearted, curious and a great reader--are nice and fairly consistent, for all the other continuity issues.
posted by mark k at 9:19 PM on December 8, 2020 [1 favorite]

Halfway through this now. I guess it's too late but I would have liked to see in the post a list of the stories with a brief description of them, just to help me remember which ones were in which book.

It's pretty fun reading these stories, it's got a definite box of chocolates feeling. I liked Thieves' House a lot.. Supreme swordsmanship is never really enough... Fafhrd and Mouse are excellent swordsmen, a little better than everyone they meet but they are not overpowering. There was a line in the living-treasure-tower story like, "Fafhrd had heard stories of swordsmen who could best four foes at once, and those stories were lies," which is funny to me because the old D&D conception of a "Hero" level fighter, level 4, was that they were worth 4 normal troops.

Cleverness is much more relevant to their survival, which weighs things a little towards Mouser.. and it does seem like he gets the spotlight more often as someone who overcomes things and saves their collective bacon.
posted by fleacircus at 9:21 AM on January 11, 2021 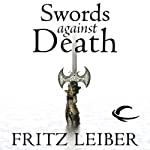