Seven gunmen from a variety of backgrounds are brought together by a vengeful young widow to protect her town from the private army of a destructive industrialist.


"If the sight of Denzel Washington, guns blazing and saddled up for his first western, doesn’t get your pulse racing, read elsewhere. Ignore the hot air blowing in from the Toronto Film Festival, where The Magnificent Seven premiered, that suggests Antoine Fuqua’s remake starring Washington, Chris Pratt, Ethan Hawke and an ethnically diverse cast, isn’t up to snuff. Really?" - Peter Travers [RollingStone]

"The new movie is as moth-eaten as the serapes strewn through the 1960 film, but there’s no denying the appeal of the image of Mr. Washington riding a horse, shooting a Colt and leading a posse of vigilantes to save a mostly white Western town." - Manohla Dargis [NYTimes]

"Rarely have so many charismatic actors been used in a film that feels quite as soulless as Antoine Fuqua’s update of “The Magnificent Seven.” It’s one of those projects that should work on paper. The cast is perfectly assembled, and I’ve actually been a bigger fan than most of Fuqua’s recent old-fashioned morality plays like “The Equalizer” and “Southpaw.” However, this effort, the opening night film of the Toronto International Film Festival, too often registers as hollow, an exercise in genre that has echoes of the John Sturges and Akira Kurosawa versions, but little of the charm of the former and none of the depth of the latter. " - Roger Ebert [RogerEbert]

"Antoine Fuqua’s superhero-style take on the 1960 western has a starry cast, from Denzel Washington to Ethan Hawke, but his gunslingers seem to have taken their cue from Blazing Saddles" - Peter Bradshaw [TheGuardian]
posted by porpoise (2 comments total)
First off, race relations during the historical period of Western expansion and during the golden age of the Western genre were horrible. This movie addresses this by mostly ignoring it, or framing some jokes around it. It's far from perfect, but the original cast was all-White and Antoine Fuqua deliberately chose a more diverse cast - but left a lot of stereotypes in. Personally, as a POC I'm not bothered too much.

Setting that aside, this is a star studded 2010's actioner with instant noodle Western flavoured powdered soup base seasoning where everyone got to chew some scenery.

Its competently done, as far as I could tell Washington was enthusiastic about the part, Pratt had just shot to fame on 'Guardians of the Galaxy, and D'Onofrio was ascendant again in 'Daredevil' and was standout here.

LEE did get a line "Equal shares. I win fights, he helps navigate the White man's prejudices."

Hawke probably benefited from this and 'In a Valley of Violence' also released in the same year for a bravura performance in 'The Good Lord Bird' mini.
posted by porpoise at 8:04 PM on March 13, 2021

I only have about three things stuck in my mind from seeing this when it went on demand. The baddie is basically awful, bog standard, hackneyed shouty arsehole. Second, the clunky epilogue where they spell out that the magnificent 7 were the people in the movie, thanks for that director. Finally, when Denzel goes into the bar at the beginning and shoots anyone who gives him trouble, how does Chris Pratt get his gun out to back him up, without Denzel shooting him? 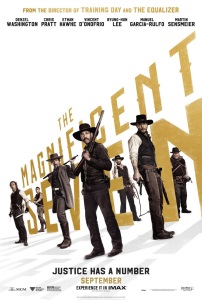