In this adult animated sitcom, a Mental Organism Designed Only for Killing must balance his work and family life. Starring Patton Oswalt.


Currently streaming on Hulu in the US, and on Disney+ Star in Canada, western Europe, Australia, New Zealand, and Singapore.
posted by 1970s Antihero (20 comments total) 3 users marked this as a favorite
Watched the pilot and still giggling at the idea that Iron Man binges The Great British Bake-Off while fighting MODOK.

One of the LEGO Marvel games had a very cute MODOK but this may be my new favorite interpretation. It's the little things, like taking Pym particles and making them chewable.
posted by fifteen schnitzengruben is my limit at 8:34 AM on May 21, 2021

Holding out for the Mental Organism Designed Only for Kittens version.
posted by praemunire at 12:24 PM on May 21, 2021 [1 favorite]

Oh I had no idea this was happening. MODOK and his numerous variants are always great fun. Will have to keep this in mind whenever next in the mood for a Hulu month.
posted by one for the books at 1:48 PM on May 21, 2021

I watched the trailer a few weeks ago, suspiciously, and ended up laughing my ass off, so I'm really happy to see that it's dropped. I'm looking forward to this in the Marvel lull before Loki premieres.
posted by kitten kaboodle at 2:51 PM on May 21, 2021

We gave up midway through the first episode. On paper, this should've been something we loved but while there were a couple laughs, it didn't work for us. I am glad other people like it.

I got through the first episode but I probably won't watch the rest. Oswalt isn't the voice I've always pictured for Modok, plus some of the humor travels down that sociopathic route that made me pass on the Harley Quinn cartoon.
posted by Catblack at 11:29 AM on May 22, 2021

I watched the first episode and I didn't particularly like it but it strongly felt like a show trying to figure what it wanted to be and what it was trying to say. I am not sure if I'll watch the other episodes but I wouldn't be surprised if it gets better around episode four or five.

Generally I'm not a fan of Robot Chicken so I have some questions of those who've watched it, because I have a tween boy hounding me about it:

I haven't seen a lot of content warnings on this - I see it listed as MA in some places, 14 in others. What are we talking about with those ratings? Cartoon violence? Sexual humour? I guess what I am saying is, ultimately, how Robot Chicken is this?
posted by Ashwagandha at 1:18 PM on May 22, 2021

It has been a while, but I'd say the one episode I saw feels pretty Robot Chicken in those terms of cartoon violence and possibly sexual humour.

Spoilers for the first episode had a minion getting an arm shot off, said arm being later infused with a bomb and then throw at a beast. The beast caught it with his mouth, and the bomb subsequently exploded. The minion, whose arm was detached joked about it a couple of times (a crack about his shirts not fitting and losing the arm while reaching for the coffee he thought was for everybody).

Other minions got killed, were told they were likely to be killed ("you're going on a mission, I don't expect you to survive" type of thing), experienced jokes about their families expecting very poor survivor benefits (which the leader reneged upon providing).

The were comments about the aforementioned beast (an evil science experiment) urinating from what looked like his mouth.

I don't remember anything explicitly sexual in the episode (although it may have slipped my mind) but there was a bit about MODOK kicking his wife out of their "marital bed" so that he could sleep with a purloined trophy (Iron Man's boot). MODOK's wife ends up feeling neglected as MODOK works to regain his evil empire and says she wants a divorce.

The evil, second-in-command, who is is woman, feels pretty powerless at work, and (rightfully) accuses MODOK of running the organization into the ground and bankrupting it.

In contrast, there were also jokes about Iron Man having problems limiting his binge watching of the Great British Bake Off while fighting MODOK, so the jokes run the gamut.

Since I don't know your son or your parenting style, I'd say watch an episode or two to get the feel for it before letting your son view it.
posted by sardonyx at 2:56 PM on May 22, 2021 [1 favorite]

Watched, was expecting to love, but did not. It wasn't that funny, bottom line. All the pieces are there, the production values are good, the general plot and characters are fine, but there's no strong narrative to make me care about the characters.

It falls remarkably flat. Robot Chicken seems like an inspiration, but it has none of the sharp edge or wit that Robot Chicken can have. The later is also more of an anthology show, with no overriding narrative, while MODOK is trying to be series. Maybe if MODOK was a series of skits centered around MODOK trying to take over the world, but constantly failing? So there would be various skits/schemes, that fail in humorous ways, as MODOK tries to be the very best villain he can be.

Note that the show is done by Marvel Television, as opposed to Marvel Studios, the later of which has done all the films, along with the shows on Disney+. Marvel TV was responsible for the Netflix shows, Agents of Shield, Agent Carter, and Cloack & Dagger. That may explain a lot.
posted by Brandon Blatcher at 3:39 PM on May 22, 2021 [3 favorites]

Yeah, first episode very blah. Flat is a good choice of words. I'm not so deep into Marveldom to really know anything about MODOK, but the early reviews made this sound promising. But I'm just not seeing it so far. Not sure I'll bother with the rest.
posted by Naberius at 6:26 PM on May 22, 2021 [1 favorite]

I refuse to watch this until someone confirms for me the presence of MODOKMODOK.
posted by Parasite Unseen at 6:52 PM on May 22, 2021 [3 favorites]

. Marvel TV was responsible for the Netflix shows, Agents of Shield, Agent Carter, and Cloack & Dagger. That may explain a lot.


Explain what ? Agents of Shield, Agent Carter, Cloak & Dagger, Runaways and most of the Netflix shows were pretty good.
posted by Pendragon at 5:24 AM on May 23, 2021 [5 favorites]

I couldn't finish the first episode. The jokes are not good, and it is pushing them painfully hard.
posted by fleacircus at 7:41 PM on May 24, 2021

I finished the series. I found it too abrasive and random to binge, and I didn't like GRUMBL at all: satirizing generic tech co. circa 2010 felt pretty obvious and leaving Stark Industries right there, unsubverted, diluted it further. I thought the more fundamental premise of giving MODOK a family and relationships was a fun idea, though, and I did think the show picked up maybe around episode 4 when it started drawing more life from obscure cameos (Angar the Screamer, Arcade, etc.) and poking fun at the the weird texture of the Marvel universe. That's also about when I started to feel MODOK even had a conscience to ignore. A lot of what happens after that is still mean, but it's not always indifferent to human emotion. The ending suggests the writers see that as a crucial issue too, but they went ahead and kept the problem alive I guess to set up a season 2 that probably the show doesn't deserve. IMO by that point it was well past time to give the audience something truly nice.
posted by Wobbuffet at 10:55 AM on May 29, 2021

I thought this was fine. An OK addition to Marvel television that never got as bad as the very worst bits of other shows (looking at you, Iron Fist) but never got as good as the best. M.O.D.O.K. is not the first villain I would have thought they'd focus on, but maybe that's the point. Melissa and Lou were the highlights for me. If you are looking to focus limited screen time on the best of Peak TV (and film) this is not the show for you, but if your interest is in expanding your exposure to the Marvel Cinematic/TV Universe this is not the worst way to spend your time (again, looking at you, Iron Fist)
posted by Anonymous at 5:31 AM on August 2, 2021 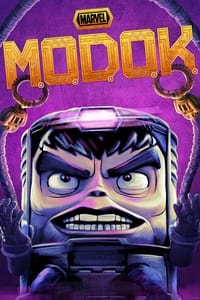