A.D. 2417. The future of the galaxy is threatened by multiplanetary corporations. To Cat, an illiterate slum kid whose catlike green eyes brand him as half alien, the destiny of humankind is insignificant. But his uniqueness targets him for a government experiment, and he discovers how to use his telepathic powers in terrifying new ways. As Cat's powers grow stronger they lead him toward brutal confrontations with deadly forces. Can Cat seize his enemies' minds before they possess his?


Joan D. Vinge is best known for her award-winning Snow Queen, but her (ostensibly) YA Psion is an underappreciated sci-fi bildungsroman that lays the stage for the rest of the series to tackle issues of trauma, colonialism, and socioeconomic status.
posted by brook horse (3 comments total) 3 users marked this as a favorite
I loved this series as a kid and I've loved it on every re-read. Cat is one of the most memorable characters from my childhood, though my strongest memories are of the second book which is probably my favorite. I re-read Psion recently and it was definitely rougher around the edges than the other two, but still great. It sticks to its guns as a bildungsroman rather than SF action or mystery or anything else. The plot is entirely in service of the coming-of-age story, which is what made Psion feel unique as a SF book to me. Even in this book, Cat comes through as a character that feels very real, and whose arc still rings true to me today. Vinge wrote in an introduction that Cat is one of the only one of her characters that essentially came to her fully formed and demanded she write his story, and you can tell.

It isn't as major a theme in this book, but I always liked that Vinge decided that if she was going to write an" allegory for racism, a person of color should be the protagonist. I also appreciated how she addressed the realities of poverty without ever making it seem like poverty-porn. But my favorite thing is the handling of trauma and relationships, and that the novel focuses entirely on Cat's growth in this respect, with his psionics making metaphor literal and the plot as a vehicle for him to learn how to connect with others again after his trauma.
posted by brook horse at 8:13 PM on September 7, 2021

Oh, I remember this book! I read it when it came out, which is nearly four decades ago now, so my memories are a bit dim, but I remember enjoying it.

I definitely read the sequel, but for some reason wasn't aware of the third ... *checks* Ah, the third one came out quite a few years later. I must have missed it.
posted by kyrademon at 8:40 AM on September 8, 2021

Whelp, I also missed this comment, oops. I would highly recommend the third book! A lot of the stuff that's just hinted at or mentioned here comes out full force there.
posted by brook horse at 3:18 PM on November 19, 2021 [1 favorite] 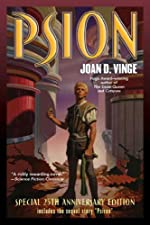