An angel delivers prophesies that condemn individuals to Hell at a specific future time. Three supernatural monsters then appear at that time to batter the person to near death before incinerating their body. The cult New Truth and the gang Arrowhead gain power by playing on people's fears.


A meditation on free will and the implications for society on the supernatural becoming immanent.

Almost inevitably any review of this tends to mention Squid Game, almost certainly just because it's Korean, but more charitably as it’s high concept and on Netflix (and they do share masked VIPs witnessing deaths - maybe that’s more of a thing than I realised?)

I wish they’d fleshed out the societal implications a bit more, and the late shift to a thriller tone is awkward, but overall I really liked this. It took some narrative risks and unexpected choices, and the ending of episode 3 and subsequent time jump to episode 4 was genuinely effective storytelling (even if they undid some of it later).
posted by Hartster (7 comments total) 2 users marked this as a favorite
*Dramabeans recaps - Episodes 1-3, Episodes 4-6

I watched the first episode when this dropped, what with it being a new Netflix Kdrama and it starring Yoo Ah In (who was in 'Chicago Typewriter' which I adored). But I was on the fence about whether I wanted to keep going. From skimming the comments at Dramabeans & MyDramaList, opinion seems pretty divided between the loved it/hated it camp, but I got the impression that I was not going to end up in 'loved it' land if I kept going, so I stopped.
posted by oh yeah! at 6:03 AM on December 5, 2021

Three supernatural monsters then appear at that time to batter the person to near death before incinerating their body.

Thorzdad: it was kinda that. I watched about two episodes, maybe part of a third, but it was just brutal, just a pounding on everything, and not really getting any closer to answering questions that I had. I did really like Skull Mask and wanted to see more of them, maybe find out who they were, but I just had to give up.
posted by Countess Elena at 8:29 AM on December 5, 2021

I really really liked this, and if you're on the fence I suggest sticking with it. While it's certainly bleak, the violence serves a purpose, and is toned down some in the second half. There's a big plot shift in episode 4, and the finale does not go with the pitch-black ending that I was expecting it to. If you're hoping to get answers to why this is happening or how people are chosen, though, you won't get that. It reminded me a little of The Leftovers: people trying (and failing) to make sense of unexplainable tragedy.
posted by Sibrax at 9:04 AM on December 5, 2021 [2 favorites]

Thanks for posting this!

I had trouble with the violence also but kept going then I couldn't bring myself to watch the last 6th episode for a while for reasons other than physical violence. I agree with Sibrax. Things get more bleak than brutal. From episode 3, you realize humans are way scarier than these "angels". (Of course they are.) There will be huge reveals that reshape everything that happened from the beginning once or twice although as mentioned above, no real answers, which I didn't mind. This reminded me of The Leftovers as well plus the Japanese manga 20th Century Boys.

I read somewhere that the writer and the illustrator will start and finish a webtoon version first, and it won't answer much either. Sorry to compare it with Squid Games, but I found this one to be more fascinating with better storytelling.
posted by dogstoevski at 12:06 PM on December 6, 2021

I find the execution of this uneven in a way that tests my patience, but the central premise is so good and interesting I cannot let go. I'm about halfway thru ep 5 and am all but certain to finish soon.
posted by DirtyOldTown at 9:05 AM on December 10, 2021

I binged this today, almost in spite of myself. I'm not usually ok with lots of violence.

It is pretty brutal, at least in parts. And there are NO ANSWERS, so you need to be able to live with that. I'm kinda not sure what was meant by what happened at the end, but it was a bit better than where I thought they were going to go with it.

I kept being reminded of Ted Chiang's story "Hell is the Absence of God," more in feel than in detail.

And I thought the Arrowhead group was every bit as terrifying as the monsters beating people to death (with lots of collateral damage) and then incinerating them.
posted by Archer25 at 8:12 PM on January 29 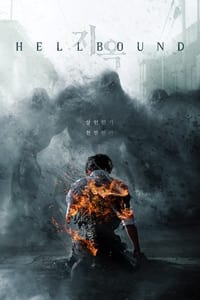