The fourth episode of the new Sex and the City series.


After returning to her old apartment, Carrie decides to sell the Fifth Avenue residence. To attract more buyers, Carrie's realtor, Seema, clears everything out and stages the entire condo with beige tones, depressing Carrie. Charlotte cultivates a friendship with Lisa Todd Wexley, a socially prominent African American woman whose son attends Lily's school; Charlotte then goes into overdrive to make her and Harry's social circle more culturally diverse. Miranda and Nya bond during dinner together. Nya shares her struggle to become pregnant via IVF while Miranda reflects on the pros and cons of motherhood. Stanford has left Carrie a note saying he is in Japan with his sole client, Ashley, a popular TikTok singer, who is touring there. Anthony arrives and tells Carrie that Stanford wants a divorce. Carrie chastises Seema as being insensitive after Seema accidentally broke the glass in a framed photo of John and Carrie. Seema then says that Carrie had also unintentionally acted insensitively when she commented about Seema never having married. They apologize to each other.
posted by BlahLaLa (4 comments total) 2 users marked this as a favorite
I'm still cringing at a lot of the stuff in these episodes, but I'm also thoroughly identifying with the stuff that feels familiar, like Carrie shoving Big's ashes onto a shelf in her closet because she doesn't know what to do with them yet. Also, it's hella hard making friends in your 50s so I'm feeling that a lot.

Also: I see you, hot gray-haired producer on Carrie's podcast. No way that guy doesn't become something more by the end of this season.
posted by BlahLaLa at 6:24 PM on December 23, 2021 [3 favorites]

Agree on the cringing, but at least all the cringeworthy moments are very in character. Of course Carrie makes too big a deal about something accidental (and especially something adjacent to Big), and is oblivious to the totally insensitive thing she said previously. I thought her realtor was remarkably restrained, and Carrie was being very over-the-top about how hurt she was by something that was so obviously a mistake. I suppose it's realistic to her grief, but it's also a thing Carrie also would have done regardless.

It was harder to watch Charlotte freak out about trying to collect more Black friends, in such horrible fashion. I'm glad that she came clean by the end. But I don't think being the only white couple is comparable to being the only Black couple at a party. I'm leery of the whole "LTW is Black Charlotte" narrative that the show is trying to push, but I can't expect perfect progressive politics from Sex and the City.

I'm pretty not okay with how they did Stanford's sendoff. It's really sad and completely sucks that Willie Garson passed. But it was so jarring to have him leave on a whim, with only a note for Carrie, and a note telling his husband that he wants a divorce right before he bounces to another continent; and then to see the In memory of screen. I thought it was really disrespectful, actually, especially after that character was there for Carrie in so many ways, and even lampshaded how he wasn't ever considered part of the group last episode. I get that they didn't want to do another death, but at least have him do something like have to suddenly take care of a sick family member, or he calls Carrie to tell her about his business trip but we only hear her side of the phone convo.
posted by j.r at 9:17 PM on December 23, 2021 [8 favorites]

It was hard for me to suspend my disbelief about Seema not dropping Carrie's ass over her reaction to the broken picture frame on the heels of her "still putting yourself out there" comment.
posted by skewed at 12:12 PM on January 6, 2022

For the record, the new Zadie Smith book is a picture book about a guinea pig.
posted by betweenthebars at 1:37 PM on January 15, 2022 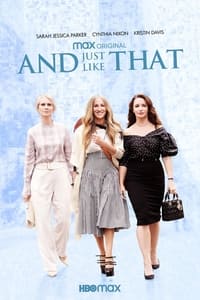