San Francisco private detective Sam Spade takes on a case that involves him with three eccentric criminals, a gorgeous liar, and their quest for a priceless statuette, with the stakes rising after his partner is murdered.


In this noir classic, detective Sam Spade (Humphrey Bogart) gets more than he bargained for when he takes a case brought to him by a beautiful but secretive woman (Mary Astor). As soon as Miss Wonderly shows up, trouble follows as Sam's partner is murdered and Sam is accosted by a man (Peter Lorre) demanding he locate a valuable statuette. Sam, entangled in a dangerous web of crime and intrigue, soon realizes he must find the one thing they all seem to want: the bejeweled Maltese falcon.

Peter Bradshaw: John Huston’s adaptation of the Dashiell Hammett novel, as well as having the greatest MacGuffin of all time, is a ringing disproof of Raymond Chandler’s belief that detective stories depend on men coming through doors with guns. People arrive with guns a good deal in The Maltese Falcon, but mostly without them; Humphrey Bogart’s Sam Spade makes a point of telling us he prefers to be unarmed, and he has a very cool line in disarming other people. And what a superb performance from Bogart: darker, steelier and more ambiguous than his Rick in Casablanca, with all the world-weary cynicism, but none of the romantic sacrifice – just a strangely opaque manipulative streak, a need to use the women that cross his path. It’s a tough wised-up routine, involving pantomime displays of furious anger to intimidate people, which shifts to jaunty, unconcerned whistling when he is alone, and finally flowers into anguish and defiance.

Roger Ebert: He saw Hammett's vision more clearly, saw that the story was not about plot but about character, saw that to soften Sam Spade would be deadly, fought the tendency (even then) for the studio to pine for a happy ending.

When he finished his screenplay, he set to work story-boarding it, sketching every shot. That was the famous method of Alfred Hitchcock, whose “Rebecca” won the Oscar as the best picture of 1940. Like Orson Welles, who was directing “Citizen Kane” across town, Huston was excited by new stylistic possibilities; he gave great thought to composition and camera movement. To view the film in a stop-action analysis, as I have, is to appreciate complex shots that work so well they seem simple. Huston and his cinematographer, Arthur Edeson, accomplished things that in their way were as impressive as what Welles and Gregg Toland were doing on “Kane.”

Consider an astonishing unbroken seven-minute take. Grobel's bookThe Hustonsquotes Meta Wilde, Huston's longtime script supervisor: “It was an incredible camera setup. We rehearsed two days. The camera followed Greenstreet and Bogart from one room into another, then down a long hallway and finally into a living room; there the camera moved up and down in what is referred to as a boom-up and boom-down shot, then panned from left to right and back to Bogart's drunken face; the next pan shot was to Greenstreet's massive stomach from Bogart's point of view. . . . One miss and we had to begin all over again.”

Frank P. Gill: All the customary hokum, which has come to be an integral part of murder mystery films, has been eliminated here as far a possible, and the result is a polished, volatile and gripping melodrama, excellently acted and interestingly photographed.
...
Once the mood is created by the director, the cast carries it through to the bitter end by a series of performances, in which no false notes are sounded.

Humphrey Bogart as Sam Spade, the detective, gives an outstanding characterization, keeping the emotions of an audience mixed and perplexed. Mary Astor, steadily adding to her stature as a dramatic screen, is very effective as Brigid O'Shaughnessy.

However, even more spectacular than either of these stars, is the debut of Sidney Greenstreet, the portly actor who creates the role of Kaspar Guttman, head of a gang of thieves, in a sustained series of brilliant scenes. Greenstreet is suave, intensely evil, and urbane, providing a perfect foil for the more ruthless Spade.

Trailer
posted by Carillon (11 comments total) 9 users marked this as a favorite
Apparently have been on a Huston streak recently. This is so good. I like how it plays with the trope of her leaning on his emotions, emoting how mercenary he's being, only to have him throw it back that she hasn't played him straight this whole time. Joel Cairo is great, Peter Lorre plays him so well. The classic fact of gunsel slipping past the censors, Sidney Greenstreet being marvelous. I love the ending when he hands the cops the cash and says this is the money they thought to bribe me with.
posted by Carillon at 1:34 PM on March 22, 2022 [4 favorites]

I love this movie. Bogart is on the top of his game in this one. His secretary is always a lot of fun and well played.

The speech about not necessarily liking Archer, but avenging him because he was Spade's partner is a great scene with his expression and her crying.
posted by Fukiyama at 4:13 PM on March 22, 2022 [4 favorites]

Yeah, as much as I liked this, my main takeaway is that I wanted more stories about Effie or this story from Effie's perspective. Great movie, though.
posted by edencosmic at 4:29 PM on March 22, 2022 [2 favorites]

A story I’ve heard is that Huston handed the novel to a secretary and told her to type it up in screenplay format and that was all it needed. Not sure how true that is. But it sure feels true. This movie is so hard-boiled the yolk is grey (in a good way).
posted by wabbittwax at 1:19 PM on March 23, 2022 [1 favorite]

Such a great, iconic movie. It’s hard to believe this was Huston’s directorial debut. That’s a bit like hitting a base-clearing walk-off homer in your first major league at-bat. I think it wasn’t until sometime in the 90s, though, that I finally saw a cleaned-up version where you could see night backgrounds and shadow details, and the like. It’s a really well-shot film.

An image that always strikes me is Ward Bond as Det. Polhaus, standing in Spade’s doorway, slightly backlit. In that big featureless overcoat, the guy looks 7-feet tall and almost as wide. Such an imposing power image.
posted by Thorzdad at 3:05 PM on March 23, 2022 [4 favorites]

I've read the book a few times and seen this film countless times and I'm always amazed at how close to the book the film is. It almost matches scene for scene. And I agree that it's amazing that this was Huston's first film.
posted by octothorpe at 7:50 PM on March 24, 2022 [1 favorite]

This is the canonical example if one finds oneself in a film discussion where someone declares that remakes are never as good as the original. This one, the Bogart version is the third remake. First. Second.
posted by sammyo at 9:46 PM on March 24, 2022 [4 favorites]

I grew up watching fragments of this as one of my Dad's favorite movies that would be rerun once a year back in the three-channels era. I didn't watch it all the way through until much later, at least in my 30s, and it's one of those great movies that just moves from the very beginning. When I similarly finally watched "Dead Men Don't Wear Plaid" it was his performance this movie that made me love his contrasted reworking as a schmuck in that movie all the more.
posted by rhizome at 6:46 PM on March 25, 2022 [2 favorites]

I love this movie except for Mary Astor. I wish it would have been made after Bogart met Bacall, with her as the female lead. That would have made the ending so much more wrenching.
posted by CheeseDigestsAll at 7:17 PM on March 25, 2022

I always wonder why Houston left the Flitcraft parable out. 'He went like that,' Spade said, 'like a fist when you open your hand.'
posted by oldnumberseven at 12:38 AM on March 28, 2022 [1 favorite]

This is the canonical example if one finds oneself in a film discussion where someone declares that remakes are never as good as the original.

Though they all follow a lot of the same plot points they all focus on different things. I think the one from 1931 in particular is interesting with the villain's homosexuality more clearly emphasised.
posted by Ashwagandha at 10:40 AM on March 28, 2022 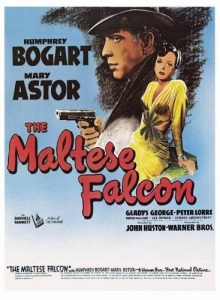