A writer falls in love with a young socialite and they're soon married, but her obsessive love for him threatens to be the undoing of them both as well as everyone around them.


While on a train, writer Richard Harland (Cornel Wilde) strikes up a relationship with the gorgeous Ellen Berent (Gene Tierney). Ellen quickly becomes obsessed with Richard and abandons her fiancé, Russell Quinton (Vincent Price), to be with him. The couple rushes into marriage, with both of them caught up in romance and Richard intrigued by Ellen's intensity. Only after settling into marriage, however, does Richard realize that she is psychotically jealous and highly unstable.

Pauline Kael: Gothic psychologizing melodrama, so preposterously full-blown and straight-faced that it’s a juicy entertainment. Evil, beautiful Ellen (Gene Tierney) hoards her father’s ashes and has a penchant for eliminating people who clutter up her life. There are scenes to cherish: Ellen impassively watching her brother-in-law drown; Ellen flinging herself down a flight of stairs to terminate an annoying pregnancy; Ellen going lickety-split on a charger, tossing Father’s remains around the Technicolored New Mexico landscape; Ellen’s long-suffering writer-husband (Cornel Wilde) remarking, “When I looked at you, exotic words drifted across the mirror of my mind like clouds across the summer sky.”

Wanda Hale: As Ellen, Miss Tierney is as sweet as honey one minute, and the next minute, vicious enough to kill. It may not be great acting, but she manages to give the impression that it is a good performance. And, exquistely dress and stunning in Technicolor, she is much more beautiful than most of the movie girls who have portrayed dangerous women.

Megan Abbott: Here, he offers us one of the most perverse and remorseless femmes fatales in film history. Driven not by the material, even relatable motivations of most of film noir’s lethal women—money, security, escape—Ellen’s “sickness” is more cryptic and upsetting. She does what she does not for a pot of gold, or freedom, but for an impulse more subterranean: a desire to replicate her consuming love for her father. At the same time, however, the movie gives us other clues that may explain Ellen’s “problem.” Foremost, we see her surrender her bachelor-style freedom (possible as her father’s ally and confidante) to take on the more traditional role of devoted wife, only to bristle and struggle under what the movie portrays as the claustrophobic demands of family and motherhood. Ultimately, Leave Her to Heaven demonstrates the impossibility of someone like Ellen—a transgressor, an outsider, a figure of “male” agency—ever meeting the era’s strict standards of femininity. And so Ellen becomes not just the most dangerous of cinema’s femmes fatales but also, ironically, one of the most defiantly sympathetic. Thanks to Stahl’s nuanced direction, as well as Jo Swerling’s script (adapted from Ben Ames Williams’s novel) and Tierney’s tense and relentless performance, we find ourselves, in sneaking moments and in subtextual ways, understanding Ellen’s frustrations as she fails, over and over again, in her attempts to conform and, more intimately, to attain love. We may even find ourselves quietly admiring Ellen, or at least retaining some awe of her, as she rejects and overturns the social expectations that have stifled and nearly crushed her.

Trailer
posted by Carillon (3 comments total) 3 users marked this as a favorite
Man what a movie. I came away thinking that like Medea, there was a reading of this film that supported, if not Ellen's actions, at least the idea that she was trapped and twisted by a patriarchal society. And then I found the Megan Abbott piece linked above, which does an even better job than I could articulating how I read the movie. If you haven't, I really encourage you to check it out.

It's funny, I tend to read a few reviews when posting films so I can find a few to include, and so many talked about how vicious Ellen was, or how psychotic she was. That's such a misreading of the film to me. I mean, yes she does unforgivable acts, I'm not excusing that. But there's a real lack of sensitivity or care shown, I don't think Richard ever loves HER, but her in her role as a woman, no wonder she craves to be seen.

Also what a raw deal for Ruth, talk about marriage being a reward. I get that there's an attempt to make it seem like a happy outcome, and I guess it could be, but she's there purely as a foil to Ellen and then gets the prize of marriage. It's Ellen's movie, but in a lot of ways she's pretty deindividualized.
posted by Carillon at 1:10 AM on September 24, 2022

All I remember from this film is an insanely sexualized horse riding scene
posted by Morpeth at 10:07 AM on September 24, 2022

Man, Vincent Price just cannot quite land Gene Tierney, can he? He keeps asking her to marry him, and she keeps saying yes, but somehow he never quite manages to close the deal.
posted by Naberius at 5:26 PM on September 24, 2022 [1 favorite] 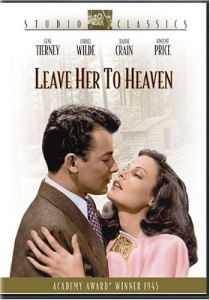