An artificially intelligent PC and his human owner find themselves in a romantic rivalry over a woman.


The feature film directorial debut of Steve Barron, who had previously directed music videos for Toto, Fleetwood Mac, The Human League, and Thomas Dolby, and who would go on to direct 1990's "Teenage Mutant Ninja Turtles" and 1993's "Coneheads", "Electric Dreams" is an early 80s computerized "Cyrano de Bergerac". Thirty years before Joaquin Phoenix would fall for his computer's artificial assistant, Miles Harding (Lenny von Dohlen) was arguing with his computer, Edgar (voiced by Bud Cort), over the affections of cellist Madeleine (Virginia Madsen).

The closing theme, "Together in Electric Dreams", was co-written by Giorgio Moroder and Phil Oakey. In 2021, a cover of the song was used in the annual UK John Lewis advert (as covered on the blue).

Last released in the US on VHS in 1991, Electric Dreams has just recently been released for purchase from various streaming services.
posted by hanov3r (4 comments total) 6 users marked this as a favorite
I saw this in the theater! I have absolutely no memory of it besides the scene in which Virginia Madsen and Edgar play a duet through the vents connecting their apartments! But “Together in Electric Dreams” is burned permanently into my brain! Forever!!!
posted by ejs at 3:40 PM on May 3, 2022 [1 favorite]

I loved this movie in my late teens, maybe just for the song which i still have on my playlist.
posted by Marticus at 3:48 PM on May 3, 2022 [2 favorites]

I LOVE this movie. ESPECIALLY the duet. It was a movie that none of my friends or family had ever heard of, but I watched it whenever I found it.
posted by alchemist at 1:38 AM on May 4, 2022 [1 favorite] 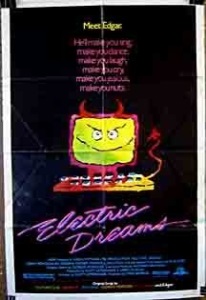