A young Scottish man travels across America in pursuit of the woman he loves, attracting the attention of an outlaw who is willing to serve as a guide.


A bounty hunter (Michael Fassbender) keeps his true motive a secret from the naive Scottish teenager (Kodi Smit-McPhee) he's offered to serve as bodyguard and guide while the youth searches for his beloved in 1800s Colorado.

Debbie Lynn Elias: With minimal dialogue, Fassbender’s depth comes from tacit conviction and a deepening on-screen, almost paternal, bond with Smit-McPhee’s Jay. The truth within the characters and the story and the performances from Fassbender and Smit-McPhee immerse us in time and place. Equally tough and tender are nights around campfires or Silas teaching Jay how to shave like a man. At every turn, we see hardship and challenges turn into strength and joy.

Written and directed by John Maclean, the story is tight, well crafted and constructed with a core essence that is more about a search for self-discovery and love than the Old West itself. Having said that, however, there is no time more perfect as a setting to explore those themes than 1890’s western United States. Characters resonate with rich texture. Although initially resisting having any voiceover, Maclean ultimately elected to employ the technique with Fassbender’s Silas to provide some continuity. The result is cohesive and unintrusive.

Anne Brodie: Slow West is clearly a low budget film but that has no effect on its poignancy or authenticity. Speaking of which Scottish filmmaker Maclean says he studied works written during that time including the books of Laura Ingalls to ensure he was offering an authentic look at the way life was lived in those pre-law expansionist times.

The film has a keen sense of majesty and respect for nature and the human heart the way Days of Heaven showed us deceitful love in the open plains and There Will Be Blood and its monster that hides in plain sight.

Slow West harks back to its cowboy roots and its noir inspiration for its strong moral core. Every evil act committed is paid for in a breathtaking final act.

Chloe Leeson: Despite its tense moments, the film also manages to be darkly funny, a violent and bloody slapstick comedy plays out in various scenes such as when an arrow bursts through Jay’s hand, a stomach churning bit of gore but also a welcome comic relief. MacLean balances these moments throughout the film perfectly, framing the shots so we never see what’s coming, but can always see the full extent of a wound or characters reaction. These scenes even feel over-acted, but are met with open arms, a nod to films of the past and a dismissal of the gritty and mindlessly aggressive films we are so used to seeing from the likes of Tarantino.

At its roots, Slow West is a story about survival and the meaning of life and how the two are opposed. For Silas, survival is key, day to day activities that top you from dying are all that is needed for a long life. But what about a happy life? Jay searches for meaning on his journey, love and happiness with his girl and seeks to move beyond the boundaries of basic survival, a trait that Silas eventually learns in this slick and often heart-warming tale of unlikely paths crossing.

Trailer
posted by Carillon (1 comment total) 2 users marked this as a favorite
I liked when in the shootout, some salt gets shot off a shelf to pour on someone's wounds.
posted by fleacircus at 2:13 AM on September 24 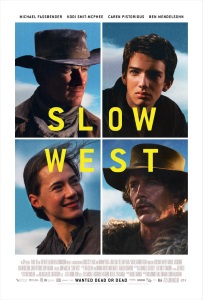