After a police chase with an otherworldly being, a New York City cop is recruited as an agent in a top-secret organization established to monitor and police alien activity on Earth: the Men in Black.


The movie was based on a comic book, The Men in Black (originally published by Aircel Comics, eventually by Marvel), and directed by Barry Sonnenfeld (The Addams Family, Get Shorty). In addition to Will Smith and Tommy Lee Jones, the film co-stars Linda Fiorentino, Vincent D'Onofrio, Rip Torn, and a pug. Smith also contributed the song "Men in Black."

Streaming on Netflix and available for purchase elsewhere; you've probably got a dusty VHS tape of it in a box somewhere.
posted by Halloween Jack (19 comments total) 3 users marked this as a favorite
this movie never fails to entertain and amuse.

One of my favorite things about this film was the theater one-sheet depicting the inscrutable, sunglass-wearing duo, "Mr. Smith. Mr. Jones." Obvious aliases, am I right?
posted by SPrintF at 8:50 AM on October 3, 2022 [6 favorites]

Man I loved this when it came out and have rewatched it on VHS a whole bunch. The humor mainly worked for me, Vincent D'Onofrio really does a great job acting like an alien, I really believed he was possessed.
posted by Carillon at 9:48 AM on October 3, 2022 [4 favorites]

I'm sure someone has manufactured a take at some point about how this dumb hilarious ridiculous awesome movie was a harbinger of George W. Bush or somesuch nonsense, but eff all those people. This movie is a delightful meringue of blue lightning bolts and splortch sounds and the absolute pinnacle of the Riggs-and-Murtaugh archetype, and sometimes you just want to eat some goddamn popcorn and watch that.
posted by Etrigan at 11:49 AM on October 3, 2022 [5 favorites]

My then-roommate was tickled to death by the fact that they actually had a Pinter-length pause in there:

We're not hosting an intergalactic kegger
posted by supermedusa at 12:11 PM on October 3, 2022 [3 favorites]

I like how the duo are basically straight men for everybody else in the movie.
posted by rhizome at 12:16 PM on October 3, 2022 [6 favorites]

Lots of favorite bits in this, but my absolute favorite is when D'Onofrio--who completely rose to the challenge of playing a giant space roach who is wearing a human skin as a suit that's way too small for him--goes, "I'll put my hands... on my head."
posted by Halloween Jack at 1:34 PM on October 3, 2022 [3 favorites]

I know most people don't remember the titles of the movies they watch, but I want to give a shout-out to the film for having Pablo Ferro titles.
posted by Nerd of the North at 2:17 PM on October 3, 2022

Ed Solomon has a nice anecdote about this film. [Twitter]
posted by urbanwhaleshark at 3:05 PM on October 3, 2022 [2 favorites]

I love seeing an actor having the time of his life playing a character who... isn't. And that's both Tommy Lee Jones and Vincent D'Onofrio.
posted by humbug at 4:57 PM on October 3, 2022 [4 favorites]

D'Onofrio was delightful. Tommy Lee Jones gives fabulous deadpan and Smith has the charisma turned up to 11 for this character.
posted by rmd1023 at 5:08 PM on October 3, 2022 [1 favorite]

We're not hosting an intergalactic kegger

I’ve been feeling nostalgic and trying to share some fun media-related moments from my youth with my middle schooler lately. We just watched this last week, and it held up pretty well! The only hiccup was needing to pause and check doesthedogdie.com because I couldn’t remember the fate of the cat and the kid had concerns.

It’s a real pleasure to be able to watch a whole action movie between dinner and bedtime, and for all the lore to be self-contained.
posted by tchemgrrl at 8:23 PM on October 3, 2022 [2 favorites]

The recruitment scene is brilliant - especially the gap between what they seem to be testing (math homework? combat skills?) and what they're actually testing (creative problem-solving, willingness to look silly in pursuit of the best result, observation before action, open-mindedness about "monsters").

That gap is never spelled out, just winked at ("you're everything we've come to expect from years of government training"). I appreciate being respected as a viewer.
posted by Paragon at 6:50 PM on October 5, 2022 [5 favorites]

Yes, that testing scene is brilliant. I recently rewatched this and found myself choking with laughter at the difficulties they were having with the written one — pencils breaking, paper flopping, pencils punching through the paper…it was just really hilarious.

I also thought the scene was particularly funny when the one recruit who was so eager to talk about what they were doing there identifies himself as Sergeant Jake Jensen. That’s the name of the character Chris Evans plays in the movie The Losers, which he made shortly before he becomes Captain America, the title Will Smith then hurls at him derisively.

I remember being so happy when this came out in a format where I could pause the picture, so I could see all of the different aliens on the screen. I couldn’t track all of the different faces in the theater.
posted by kitten kaboodle at 1:07 AM on October 7, 2022 [2 favorites] 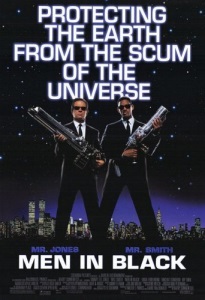