Witness a hellish vision of 1999, as social isolation, analog technology and disturbing home videos fuse into a nightmare of found footage savagery.

"Shredding" - Written and directed by Maggie Levin (My Valentine, for Blumhouse/Hulu)

"Suicide Bid" - Written and directed by Johannes Roberts (The Strangers: Prey at Night)

Currently streaming in the US on Shudder. JustWatch listing.
posted by DirtyOldTown (11 comments total)
"Somebody better call a vet, these pythons are ssssssssssiiiiccckkkkk." One of the truly rare anthologies in which I enjoy the wrap around segments.
posted by miss-lapin at 6:19 PM on October 20, 2022

This series has been wildly inconsistent even for anthologies, so I never really have much in the way of expectations for new ones. For my money, this might be the worst one yet. I really enjoyed "To Hell and Back," but the rest of it did very little for me. "Suicide Bid" is OK, and "Ozzy's Dungeon" has interesting ideas but I wasn't crazy about the execution. The other two I found just excruciating. I did like the "frame story" bits when they were just goofy non sequiturs in this one, but it bummed me out when they turned out to be part of one of the stories I could barely sit through.

I think part of what makes these so tough to pull off is that there's not much time to establish characters as being worth caring about, so most of the shorts don't even try. The difference between the small cast of "To Hell and Back" getting worthwhile moments that flesh out the characters and their relationships and how "Shredding" and "The Gawkers" don't even bother beyond "kids who say 'bro' every other word and treat each other like shit" is illuminating. That said I am tentatively looking forward to the recently announced V/H/S/85, really hoping the next batch of shorts gets this character stuff right.
posted by tomorrowromance at 8:07 AM on October 21, 2022 [1 favorite]

I found it disappointing as well. My favorite was Ozzy's Dungeon, which hilariously takes a parody of Legends of the Forbidden Temple to its natural conclusion. I thought the ending was meh because we really don't much about about that character so the revelation she's actually evil doesn't mean anything to me. However I did enjoy it up until that point Shredding was predictable and too long, With the Gawker the story was predictable and the effects were honestly terrible. Suicide Bid was ok. To Hell and Back was entertaining. I should add that segment is from the same people who did Deadstream and you can see the same sense of humor and horror in both so if you like one, you're likely to like this as well. I still like the silly wrap around and basically just ignore how it was tied into the series.

The issue of bros has been a problem with the VHS franchise since the beginning. If you go back and watch the first one it is so packed with bros that I had bro fatigue when I left the theater. Just having two brodacious segments is actually an improvement on that.

Having watched a ton of short horror films, it's absolutely possible to create characters viewers can connect with and tell an original scary story in a short amount of time. So yeah I went in with low expectations and was still disappointed.
posted by miss-lapin at 8:38 AM on October 21, 2022 [1 favorite]

The issue of bros has been a problem with the VHS franchise since the beginning.

That's very true. The first one had some stuff that could be taken that way, but given that it was by Maggie Levin (a woman, and I believe, also queer) I am inclined to take the bro-y aspects of that as satire, which is period appropriate for that scene/era. Having spent the years 1991-1996 as a scuzzball kid in hardcore clubs, that segment worked well enough for me. I like the sorority segment a lot. Simple premise, but well-executed and comically nasty and mean-spirited in a way that I always enjoy in an anthology segment. "Ozzy's Dungeon" was very well-made, but was jarring in its gore and kind of hard-to-take.

I will be finishing up seeing this tonight and I'm looking forward to the segment by the Winters.
posted by DirtyOldTown at 11:10 AM on October 21, 2022

(by first one I mean the first segment in this installment)
posted by DirtyOldTown at 11:24 AM on October 21, 2022

I really wanted to like "Shredding" more than I did; they went out of their way to make R.A.C.K. into the biggest assholes they could manage, and I felt like that was, IDK, overegging it? Being disrespectful of a space like that is typical young person shittiness but setting up and abusing mannequins representing the dead was over the top begging for it. The ensuing slaughter would've been more tense and horrifying, I think, if it'd been a radical overreaction by the ghosts to people being thoughtless jerks in the wrong place than just "these people basically begged to get killed by ghosts".

"Suicide Bid" was okay- Wikipedia points out that Giltinė is the name of a Lithuanian death goddess, and I feel like more could've been made out of the bullshit story they were feeding her, tying that in a bit. The real place it falls down is that the most immediate comparisons to what Lily's going through, to my mind are Edgar Allen Poe's "The Pit and the Pendulum" or Stephen King's "The Ledge", both of which are about somebody enduring confinement (or what amounts to it) and both of which go hard into the distressing physical and psychological experience, and I think it could've been shot to be a bit more claustrophobic and a bit more, I don't know, putting the audience very immediately into the character's shoes? Which is what found footage is best at! As it is, it's a middle of the road entry- not bad, but a good concept that could've been more deeply exploited.

There's things about "Ozzy's Dungeon" that I really like and things I was very not into. It really excels at the hints that this is a universe next door- like us, both with something sufficiently wrong with it to produce differences. The host is just openly an asshole to everybody in a way that would never have flown on Nickelodeon, there's a reference to Ozzy being "offworld", it's a decade or so later and that warrior lady is still on site, that kind of thing. Good bits of world-building which show that this is not the world you'd expect. At the same time, though, the middle stretch is just a torture porn scene that doesn't go all the way, and the conclusion leaves us with more questions than answers- fine if it's a chapter in a book, less so if it's the conclusion of a short story. It just feels grimy, in a way that most of it didn't need to.

"Gawkers" does have the fun of "shit dudes get wrecked for being shitty", and I like that, but they're kind of... unbelievably dumb? You're spying on somebody through a window with the lights on and the curtains open? That was dumb, and it would've been creepier if she'd been able to spot them despite precautions. Also the nudity really felt like 80's style tits-for-tits-sake gratuitousness, and I feel like we can be past that by now. If the short were smarter overall I'd say maybe it's about making the audience complicit? Like hey, these guys are shitty predatory dudes who got what was coming, but you didn't look away from the screen when she undressed either, and here she is, last short of the short, in full snarling Medusa mode, coming straight at the camera, at the audience, at you. Hell, maybe that was the point? Maybe I'm being unfairly ungenerous.

"To Hell and Back" was pretty fun! Good sets, good creatures, good guy-who-just-can't-let-shit-go action. I found the end confusing- I don't understand why they murdered the videographer and the vessel- the first seems contrary to the point of having the videographers in the first place, and the second seems like a waste of a perfectly good vessel who could presumably be exorcised? Also I wanted to see what the result of the followup bit in the credits was.


The issue of bros has been a problem with the VHS franchise since the beginning.

I spent a lot of the early to mid 90s in gross all ages clubs and other random spaces turned into single-use "venues"--my all-time favorites being an empty department store in a strip mall and the second floor of an appliance store clearly built in the 50s that was still very much in business--so the band's whole plan to go play in a place like that totally made sense. Things that didn't make sense were the production values on their own R.A.C.K. video and how slick the Bitch Cat video was. It looked very MTV for an "underground" band of the time. Songs weren't too bad, though!

The conceit that the last couple of entries have taken place at a certain time hasn't really made much sense to me. Maybe they're just looking for a blanket way to avoid characters having cell phones? I kind of wish they'd put restrictions on the filmmakers like "you can only use camera tech available when the movie takes place," because I think that could result in some interesting technical approaches rather than just shooting everything in digital HD and throwing "tape noise" plugins on the footage in post. I will wait in vain for the Dogme 95 V/H/S/ movie, I guess, heh.
posted by tomorrowromance at 2:04 PM on October 21, 2022 [2 favorites]

The conceit that the last couple of entries have taken place at a certain time hasn't really made much sense to me. Part of it is capitalizing on nostalgia like the FEar Street Trilogy on netflix.
posted by miss-lapin at 2:25 PM on October 21, 2022

But also as this entry referenced, there was a lot of anxiety around 1999. Made more sense to me than the previous entry.
posted by miss-lapin at 2:27 PM on October 21, 2022 [2 favorites]

I thought Gawkers was alright, and definitely personally sort it into "shitty dudes get what they deserve."

I haven't rewatched the first few installments in a while, and would be interested to see if the sexism in those is also generally punished. I suspect it was, but whether a person wants to absorb all that shit, even if it results in comeuppance, is a fair point.

I loved the Winters' segment, which was funny as hell.

All in all, that's two I thought were great, one I thought was well made but brutal and not fun, two I thought were solid. That makes this the second best installment, next to 2, for me, although I might rank the first higher on rewatch. Hard to say.
posted by DirtyOldTown at 10:53 PM on October 21, 2022

The big "sexist dude goes unpunished" short that comes to mind is "The Sick Thing That Happened to Emily When She Was Younger", and that's still about a dude who plainly has it coming even if he doesn't get it.
posted by Pope Guilty at 11:42 PM on October 21, 2022 [1 favorite] 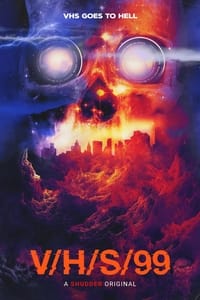