The March sisters live and grow in post-Civil War America.


Based on the novel by Louisa May Alcott, this (trailer) is the fifth film adaptation. The cast includes Susan Sarandon as Marmee, the March sisters played by Trini Alvarado, Winona Ryder, Claire Danes, and Kirsten Dunst/Samantha Mathis. Christian Bale, coming off Newsies and Swing Kids, plays Laurie.

It was nominated for Oscars for Best Actress (Winona Ryder as Jo), Best Costume Design, and Best Original Score.

Roger Ebert wrote at the time, 'At first, I was grumpy, thinking it was going to be too sweet and devout. Gradually, I saw that [director] Gillian Armstrong was taking it seriously. And then I began to appreciate the ensemble acting, with the five actresses creating the warmth and familiarity of a real family.'

Alison Lurie, writing in the New York Review of Books (archive.ph), said 'in many ways it is an outstanding success' and contrasted the traditional and radical elements of the story.

Currently streaming on HBO Max in the US, available to rent/buy from Amazon, Apple, YouTube, etc.
posted by box (1 comment total)
The casting in this version is wonderful. Christian Bale is the best Laurie.
posted by TWinbrook8 at 10:20 AM on October 31, 2022 [1 favorite] 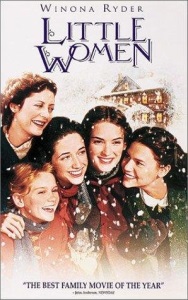