Perseus (Harry Hamlin), son of the Greek god Zeus (Laurence Olivier), grows up on a deserted island. His destiny is to marry Princess Andromeda (Judi Bowker), who will someday rule the city of Joppa. But as long as the satyr Calibos (Neil McCarthy) -- who uses a giant vulture to kidnap Andromeda's soul every night -- is alive, no one can marry her. Perseus travels to Joppa, where he must defeat Calibos and other mythological monsters to rescue Andromeda.

You are recapping my childhood in your posts today :D
posted by Saxon Kane at 8:46 AM on November 22 [7 favorites]

saw this so many times as a kid (and loved it!) but how on earth do I not remember that Maggie F'ing Smith was in it????
posted by supermedusa at 10:00 AM on November 22 [2 favorites]

I had this on a VHS tape when I was a kid, we watched it obsessively, when I was younger I could quote most of it by heart, and we'd play with friends recreating some scenes from the movie. I have it on DVD, but it's not an easy rewatch, I should invite my childhood friends and do a watch party maybe that would help.
posted by WaterAndPixels at 10:08 AM on November 22

Mom wouldn't let me see this movie when I was a kid because she read some article about someone having a seizure while watching it.
posted by The Underpants Monster at 11:48 AM on November 22 [1 favorite]

My partner loved this one as a kid. I had never seen it until we watched it. He and my kid have also watched it together, which intensified her interest in Greek myths (I had just gotten her the Daulaire's book of myths, she loved it, there followed many drawings of Medusa and her snakes, and Prometheus getting his liver eaten by eagles.)

It's so hard to watch this kind of movie now, every scene goes on for too long. My sense of correct pacing has changed in our time of constant cuts and explosions.
posted by Lawn Beaver at 12:55 PM on November 22 [1 favorite]

I loved this movie when I was a kid. I asked for (and got) the rather large toy kraken for Christmas one year. It wasn’t particularly well articulated but it sure was big.
I think I had most of this movie committed to memory, too, so even years later if I saw it was on while flipping channels, I knew if I had missed the Medusa scene or not; that was really the excuse for the entire movie, in my opinion.
posted by Mister Moofoo at 3:51 PM on November 22 [1 favorite]

I'm a huge Ray Harryhausen fan but this hardly his best and the non-monster scenes are pretty dull. I still love the Medusa sequence though.
posted by octothorpe at 3:57 PM on November 22

I was 9 when I saw this in the theater. As a bookworm who had a favorite Greek mythology book, I remember being furious at the movie for getting the myths wrong -- having Perseus ride Pegasus? Bellerophon rode Pegasus. Looking back now, it's kind of funny how offended I was. The mechanical owl irked me too.
posted by oh yeah! at 8:31 PM on November 22 [3 favorites]

oh yeah! - reminds me of how much I hated the 1939 movie of The Wizard of Oz as a kid because it was so different from the books. Pint-size literary snobs, unite!
posted by The Underpants Monster at 8:55 PM on November 22 [2 favorites]

I was 10. I remember seeing a full-page B&W ad in the Chicago Tribune advertising this movie, and that along with a couple TV commercials was how I learned of it. Olden days.

I loved it. But yeah, I remember the non-SFX stuff to be pretty boring and the owls to be kind of annoying. I haven't seen it aside form a few minutes here and there on cable since 1981.
posted by SoberHighland at 6:47 AM on November 23

Loved this as a kid and saw it a million times. I may have seen it in the theater too. Somehow after this I was able to catch Seventh Voyage of Sinbad and the others in the 60s-70s Harryhausen mythology series, which I also liked. I've seen it fairly recently and I found it quite watchable in a Star Wars way.
posted by rhizome at 12:30 PM on November 24

I saw it in the theater when I was an impressionable 6 year-old. I remember being excited to see it because the poster was stylistically similar to one of the Star Wars posters (Hildebrandt I think?). Looking back on it, what stands out is this movie wasn’t afraid to really go for it. Without fear of looking hokey or foolish, this movie COMMITS TO THE BIT. Sometimes it does end up in a gooey mess of cheese but that’s ok. Weird details stick with me like what a thick and luscious ragu they must have been using as blood, or the casual nudity that you wouldn’t expect in a movie aimed at kids, Also: Burgess Meredith (by the Gads), Maggie Smith, Ursula Andreas, and holy crap, Sir Laurence O-fucking-livier? What a cast!
posted by wabbittwax at 5:51 PM on November 24 [1 favorite] 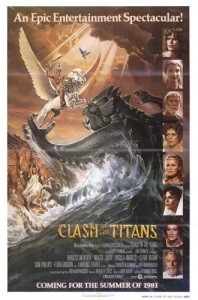