Three years after the accidental death of her husband Jolly, Kay dares to move back into their former home, persuaded by her new fiance Rupert. But soon her worst expectations come true, when not only her old memories haunt her, but also Jolly's ghost, who doesn't approve of her new mate. Invisible to anyone but Kay, he tries to prevent the wedding.

It is a remake of Dona Flor and Her Two Husbands a 1976 Brazilian film, based on Jorge Amado's book of the same name

Field was nominated for a Golden Globe Award for Best Actress in a Motion Picture – Comedy/Musical for her performance. In a 1991 interview, Caan claimed that making Kiss Me Goodbye was one of the most unpleasant experiences of his life, and that as a consequence, he did not make another film for five years. (He did appear in a miniseries the following year.)
posted by miss-lapin (2 comments total)
Prompted by DirtyOldTown posting Fosse films, I thought I'd post this as Jolly (James Caan's character) seems modeled on Fosse.
posted by miss-lapin at 2:08 PM on December 1, 2022 [1 favorite] 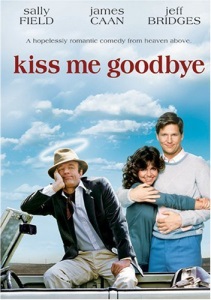