A man travels around a city with a camera slung over his shoulder, documenting urban life in 1920s Moscow, Kharkiv, Kyiv and Odesa with dazzling invention.

"We see the making of a film and at the same time the film that is being made. The interweaving of the two is constant and, in its playfulness, disarming, stimulating, often baffling." -- Erik Barnouw, Documentary: a History of the Non-Fiction Film

"It made explicit and poetic the astonishing gift the cinema made possible, of arranging what we see, ordering it, imposing a rhythm and language on it, and transcending it." -- Roger Ebert.

"Vertov's exhilarating and often hilarious exploration of the relations between cinema, actuality and history opened up all the issues Godard, the avant-gardes, and political film-makers have been wrestling with ever since." -- Time Out Film Guide

Available in the U.S. on Vudu and Kanopy, also for pay from various sources. JustWatch listing. It's also available on DVD with countless possible soundtracks.
posted by johnofjack (1 comment total)
Personally, I don't know why they named this Man with a Movie Camera; they should have named it Woman with an Editing Suite. Nearly everything which makes this film memorable still, nearly 100 years later? That's not in the raw footage; it's in the editing.

Mikhail Kaufman lowers two legs on his tripod and gets a Dutch angle on a train? That's nice enough, I guess, but it is so much more when Yelizaveta Svilova lays the mirrored image over it, putting two trains on a collision course.

Mikhail Kaufman sets up a camera on a hill, and also films a camera in closeup? Nice enough, but Yelizaveta Svilova puts the hill on the camera, so the cameraman climbs a giant camera.

That said, the woman in the car who tires of being filmed, and makes "cranking a camera" motions at the cameraman? Sure, I'll credit that to Kaufman for capturing it--and the passenger for doing it (and Svilova for including it).
posted by johnofjack at 2:40 PM on December 1, 2022 [1 favorite] 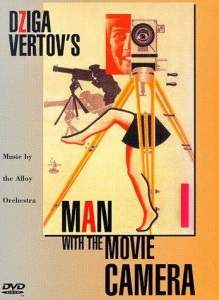