[TRAILER] Convinced of his irresistible appeal to women, Texas dishwasher Joe Buck (Jon Voight) quits his job and heads for New York City, thinking he'll latch on to some rich dowager. New York, however, is not as hospitable as he imagined, and Joe soon finds himself living in an abandoned building with a Dickensian layabout named Enrico "Ratso" Rizzo (Dustin Hoffman). The two form a rough alliance, and together they kick-start Joe's hustling career just as Ratso's health begins to deteriorate.

Currently streaming in the US on many, many services. JustWatch listing.
posted by DirtyOldTown (6 comments total) 1 user marked this as a favorite
It really is a bleak and brutal movie in a number of ways, but still kind of refreshing simply for being a movie where the naïf doesn't become a big hit in the big city by proving the superiority of his honest, homespun ways over all the glitter and sophistication of the city slickers.
posted by Halloween Jack at 10:38 AM on January 18 [2 favorites]

Also:
"Everybody's Talkin'" by Harry Nilsson, full version with stills from the movie.

The Futurama parody.
posted by Halloween Jack at 10:48 AM on January 18 [1 favorite]

The only X-rated movie to win the Best Picture Oscar. Well, any Oscar actually. It was re-rated down to R a couple years later, with no cuts made.
posted by Thorzdad at 1:47 PM on January 18

Story behind I’m walkin’ here!
posted by Ideefixe at 5:41 PM on January 18

I finally watched this movie after seeing it mentioned here. What an interesting and affecting film! It's very amusing, but almost never laugh-out-loud funny. It's also very sad. Joe Buck and Rico Rizzo personify the hollow masculinity and desperate grifter personalities so common in this world. But Joe is too empathetic and innocent to be a macho jerk. And Rico is too lonely and needy to be a complete fraud. The final scenes are so simple and understated, yet unforgettable. Even the bit players—like Bob Balaban—leave a deep impression. (I never realized the bit in Seinfeld where he retches after reading Seinfeld and Costanza's script was a nod to this movie.) The cinematography is also amazing!

Negatives: I found some of the ADR distracting, and the party scene was way too long. Also distracting was trying to convert 1969 dollars into today's dollars, since so much of the film revolves around money (or lack thereof).
posted by jabah at 7:21 AM on January 19

I love this movie, the song, big Nilsson fan, I was 16 when it hit the theaters and a friend got us in.

I must have yelled "I'm walkin' here!" hundreds of times on city streets in the last 54 years, and once pounded the hood of a BMW with my cane while dialing the local precinct on my cell ( jerk almost crushed me in my local crosswalk). He got a ticket, and a dent. Cops gave me a ride home.

It's just the perfect NYC exclamation! Even works with pedestrians.
posted by alwayson_slightlyoff at 11:09 PM on January 19 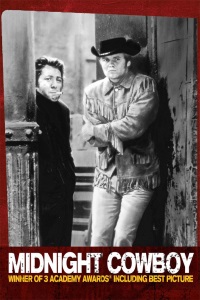